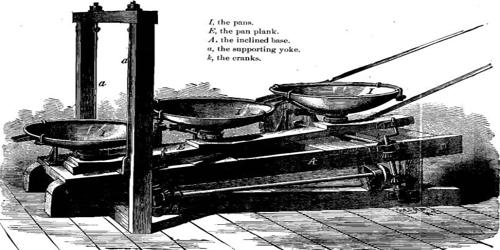 In science, an amalgamation is defined as a mixture of metal and mercury. The pan amalgamation process is a method to extract silver from ore, using salt and copper(II) sulfate in addition to mercury. It is the method of recovering silver and gold from their ores, in which a cast iron pan or barrel is used for contacting a slurry of the crushed ore with salt, copper sulfate, and mercury; the released silver and gold form an amalgam with the mercury. This is a process for extracting gold or silver from their ores; the ore is crushed and mixed with salt, copper sulfate, and mercury, and the gold or silver amalgamize with the mercury. The process was widely used from 1609 through the 19th century; it is no longer used.

The patio process had been used to extract silver from ore since its invention in 1557. One drawback of the patio process was the long treatment time, usually weeks. One of the major weaknesses of the patio process was how long it took. In order to speed up the process, Alvaro Alonso Barba invented the pa process or pan amalgamation in the early 17th century. Alvaro Alonso Barba invented the faster pan process (in Spanish the cazo or fondo process) in 1609 in Potosí, Bolivia, in which ore was mixed with salt and mercury (and sometimes copper(II) sulfate) and heated in shallow copper vessels. The treatment time was reduced to 10 to 20 hours. Instead of mixing salt, water, mercury, copper sulfate, and ground-up silver ore in a large outdoor patio, the pan process mixed these ingredients in several shallow copper pans heated with fire (instead of the sun). This reduced the amalgamation process from taking more than a week, to only about 15 hours. Whether patio or pan amalgamation was used at a particular location often depended on climate (warmer conditions speeded the patio process) and the availability and cost of fuel to heat the pans.

In the mid-19th century, Almarin Paul further industrialized pan amalgamation by developing the Washoe process in the Washoe Valley. For this refining method, the copper pans were replaced by iron tanks with mechanical agitators that were heated by steam pipes. The amount of salt and copper(II) sulfate varied from one-quarter to ten pounds of one or the other, or both, per ton of ore treated. The loss of mercury in amalgamation processes was generally one to two times the weight of silver recovered. Eventually, better methods of silver mining and refining were developed and amalgamation-based processes fell by the wayside. But without them, silver mining would not be as developed as it is today.