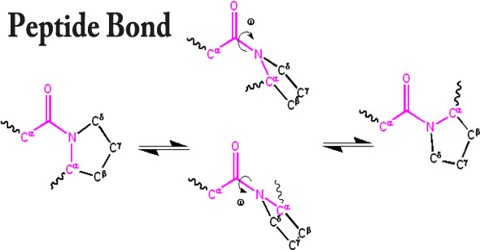 Peptide Bond is the chemical bond formed between amino acids, constituting the primary linkage in all protein structures. In a peptide bond, the carboxyl group (COOH) of one amino acid bonds with the amino group (NH 2) of another, forming the sequence CONH and releasing water (H 2 O).

Peptide bonds are the key linkages found in proteins. These bonds connect amino acids and provide one of the key foundations for protein structure. Proteins are a class of macromolecules (large molecules) that are important in biological systems. Almost all of the components of an organism will contain one or more types of protein in order to function properly. For example, in muscle, proteins are responsible for contraction and energy usage. In the stomach, protein enzymes, which are biological catalysts, speed up the process of food digestion. In essence, proteins are vital for survival. Proteins are formed from amino acids, which are the building blocks for this particular macromolecule. Amino acids are joined together in a process known as polymerization, which is where large molecules are produced by combining smaller units. Polymerization is achieved by the formation of special bonds known as peptide bonds.

Amino Acids – Every amino acid will have two key chemical groups: an amine group and a carboxyl group. Amine groups are composed of one nitrogen and two hydrogen atoms (-NH2). Carboxyl groups contain one carbon double bonded to an oxygen and single bonded to a hydroxyl (-OH) group. These two groups form the foundation of four peptide bonds. The amino acid sequence, from N- to C-terminus, determines the primary structure of a peptide or protein. The amino acids are linked through amide or peptide bonds.

Having partial double bond character, the peptide bond is planar. For steric reasons, the trans configuration is normally favored in peptides and proteins. Only rarely (ca. 0.03%) are cis-peptide bonds seen in natively folded protein crystal structures. Proline is an exception, where the proportion in the cis form is larger (ca. 5.2% of XaaPro in protein crystal structures; or 10-30% of the cis form in linear unfolded peptides in water).

Peptide Bond is relatively unreactive under physiological conditions, even less than similar compounds such as esters. Nevertheless, peptide bonds can undergo chemical reactions, usually through an attack of an electronegative atom on the carbonyl carbon, breaking the carbonyl double bond and forming a tetrahedral intermediate. This is the pathway followed in proteolysis and, more generally, in N-O acyl exchange reactions such as those of inteins. When the functional group attacking the peptide bond is a thiol, hydroxyl or amine, the resulting molecule may be called a cyclol or, more specifically, a thiacyclol, an oxacyclol or an azacyclol, respectively. The peptide bond is synthesized when the carboxyl group of one amino acid molecule reacts with the amino group of the other amino acid molecule, causing the release of a molecule of water (H2O), hence the process is a dehydration synthesis reaction, also known as a condensation reaction.

When two amino acids form a dipeptide through a peptide bond it is called condensation. In condensation, two amino acids approach each other, with the acid moiety of one coming near the amino moiety of the other. One loses a hydrogen and oxygen from its carboxyl group (COOH) and the other loses hydrogen from its amino group (NH2). This reaction produces a molecule of water (H2O) and two amino acids joined by a peptide bond (-CO-NH-). The two joined amino acids are called a dipeptide. The formation of the peptide bond consumes energy, which, in living systems, is derived from ATP. Polypeptides and proteins are chains of amino acids held together by peptide bonds. Living organisms employ enzymes to produce polypeptides, and ribosomes to produce proteins. Peptides are synthesized by specific enzymes. In 1951, Linus Pauling and Robert Corey proposed two periodic structures for polypeptides called the alpha helix (α-helix) and the beta pleated sheet (β-sheet). They hypothesized that preferred backbone torsion angles for φ and ψ in polypeptides would give rise to these secondary structures.

In 1968, G. N. Ramachandran cataloged all combinations of φ and ψ forbidden because of steric collisions between atoms. He showed that the allowed values can be visualized on a two-dimensional plot, which became known as a Ramachandran plot. Over three-quarters of the possible (φ, ψ) combinations are excluded simply by local steric clashes.