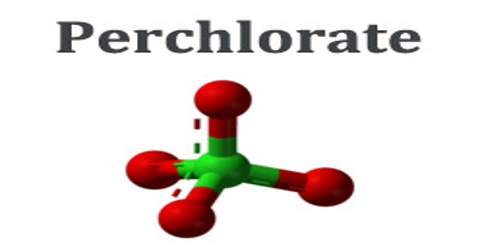 Perchlorate is a horrible toxin to human health and its absolute poison to the environment. According to the EPA, perchlorate is detrimental to the thyroid gland, metabolism, and hormonal balance. It is a salt of perchloric acid, containing the group ClO4. The preponderance of perchlorates are produced commercially. Perchlorate salts are mainly used for propellants, exploiting properties as powerful oxidizing agents. Perchlorate dissolves easily and moves quickly in underground water and surface water. It breaks down very slowly in the environment. Wastes from the manufacture and improper disposal of perchlorate-containing chemicals are increasingly being discovered in soil and water.

Production and Properties of Perchlorate

The pottassium salt was first used and quickly followed by now most important salt ammonium perchlorate. Lithium perchlorate, which has the highest weight percent oxygen, has been tested as an oxidizer in solid propellants, but has not found favor with propellant manufacturers. Perchlorate can be produced by lightning discharges in the presence of chloride. Perchlorate has been detected in rain and snow samples from Lubbock, Texas, and Florida. The perchlorate ion is the least reactive oxidizer of the generalized chlorates. Perchlorate contains chlorine in its highest oxidation number.

Most perchlorate compounds, especially salts of electropositive metals such as sodium perchlorate or potassium perchlorate do not oxidize organic compounds until the mixture is heated. This property is useful in many applications, such as flares, where ignition is required to initiate a reaction. Perchlorate actually used as the primary ingredient of solid rocket propellant and in munitions beginning in the 1950s. Perchlorate is also used in the production of explosives and fireworks. It adds the blue color to firework displays. Perchlorate remains in use and is unregulated. For disposal, perchlorate has often been dissolved in water and poured on the ground. Perchlorate dissolves easily and moves quickly in underground water and surface water. Lakes, groundwater, tap water, and bottled water have all shown high levels of perchlorate. Environmental pollution seeps directly into the food supply; research shows that the food we eat and the water we drink can be extremely contaminated with perchlorate.

In a related but smaller application, perchlorates are used extensively within the pyrotechnics industry and in certain munitions and for the manufacture of matches.