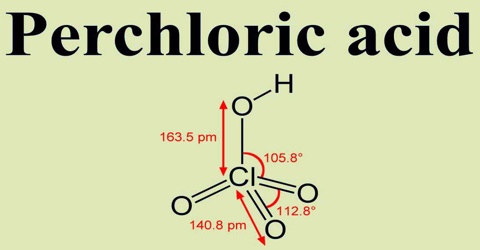 Perchloric acid is a clear, colorless liquid that is very corrosive and, under some conditions, extremely explosive. It is a powerful oxidant and is used as a catalyst and in explosives. Its chemical formula is HClO4. Perchloric acid, with more than 50% but not more than 72% acid is a clear colorless odorless aqueous solution. Corrosive to metals and tissue. Closed containers may rupture violently under prolonged exposure to heat. It is useful for preparing perchlorate salts, especially ammonium perchlorate, an important rocket fuel component. Perchloric acid is dangerously corrosive and readily forms potentially explosive mixtures.

Production and Properties of Perchloric Acid

Perchloric acid can be produced by electrolysis or by a ion exchange mechanism using a resin. The acid is extremely corrosive and is very damaging to tissue. It will form explosive mixtures with anything combustible and these mixtures may ignite or detonate without warning. Perchloric acid has many properties which make it an important acid in industrial and analytical work and its use would be much greater if its cost of production could be lowered. The usual strength of the acid is 72%wt where it forms a constant boiling point azetope. The 70% acid is fairly stable; the anhydrous acid (100%) will explode of its own accord if stored for a period of time. It can only be stored indefinitely at liquid air temperatures. It is a strong monobasic acid, stable in solutions (up to 60%), has a high boiling point. There are relatively few insoluble salts (potassium, rubidium, caesium, and thallium perchlorates are only highly soluble) and the difference in solubilities of potassium and sodium perchlorates give an easy method of separation of these two metals in analytical work.

Perchloric acid is mainly produced as a precursor to ammonium perchlorate, which is used in rocket fuel. The growth in rocketry has led to increased production of perchloric acid. It is also used for electropolishing/etching of aluminium, molybdenum, and other metals.