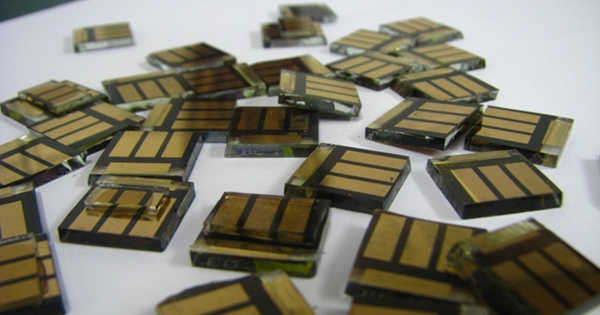 Solar cells, which convert sunlight to electricity, have long been a component of the global renewable energy vision. Individual cells are very small, but when scaled up to modules, they can charge batteries and power lights. They could one day be the primary energy source for buildings if placed side by side. However, current solar cells use silicon, which makes them more expensive to manufacture when compared to more traditional power sources.

That’s where metal halide perovskite, relatively new material to science, comes in. This crystalline structure, when nestled at the center of a solar cell, converts light to electricity as well, but at a much lower cost than silicon. Furthermore, because perovskite-based solar cells can be manufactured on both rigid and limber substrates, they may be lighter and more flexible in addition to being cheaper. However, in order to be useful in the real world, these prototypes must grow in size, efficiency, and lifespan.

In a new study published in Nano Energy, researchers from the Energy Materials and Surface Sciences Unit at the Okinawa Institute of Science and Technology Graduate University (OIST), led by Professor Yabing Qi, demonstrated that creating one of the raw materials required for perovskites in a different way could be critical to the success of these cells.

A novel way of synthesizing an essential powder is key to raising the efficiency of perovskite solar cells, say researchers.

“In perovskites, there is a necessary crystalline powder called FAPbI3, which forms the perovskite’s absorber layer,” explained Dr. Guoqing Tong, Postdoctoral Scholar in the Unit. “This layer was previously created by combining two materials: PbI2 and FAI. FAPbI3 is produced as a result of the reaction. However, this method is far from ideal. There are frequently leftovers of one or both of the original materials, which can reduce solar cell efficiency.”

To get around this, the researchers used a more precise powder engineering method to create a crystalline powder. They continued to use one of the raw materials, PbI2 but added extra steps, such as heating the mixture to 90 degrees Celsius and carefully dissolving and filtering out any leftovers. This ensured that the finished powder was of high quality and structurally sound.

Researchers have previously created a perovskite-based solar cell with more than 25% efficiency, which is comparable to silicon-based solar cells. However, in order to take these new solar cells beyond the lab, they must be scaled up in size and long-term stability.

“Lab-scale solar cells are tiny,” Prof. Qi said. “Each cell is only about 0.1 cm2 in size. Most researchers concentrate on these because they are easier to develop. However, for applications, we require much larger solar modules. The lifespan of the solar cells is also something to consider. Although 25% efficiency was previously achieved, the lifespan was only a few thousand hours. Following this, the cell’s efficiency began to deteriorate.”

Dr. Tong, along with Research Unit Technician Dr. Dae-Yong Son and the other scientists in Prof. Qi’s Unit, achieved a conversion efficiency of more than 23 percent in their solar cell using the synthesized crystalline perovskite powder, but the lifespan was more than 2000 hours. Even when they scaled up to 5x5cm2 solar modules, they still achieved over 14 percent efficiency. As a proof-of-concept, they built a device that charged a lithium-ion battery with a perovskite solar module.

These findings are an important step toward developing efficient and stable perovskite-based solar cells and modules that could be used outside of the lab one day. “Our next step is to create a solar module that is 15x15cm2 and has an efficiency of more than 15%,” Dr. Tong explained. “I hope that one day our solar modules will be able to power an OIST building.”