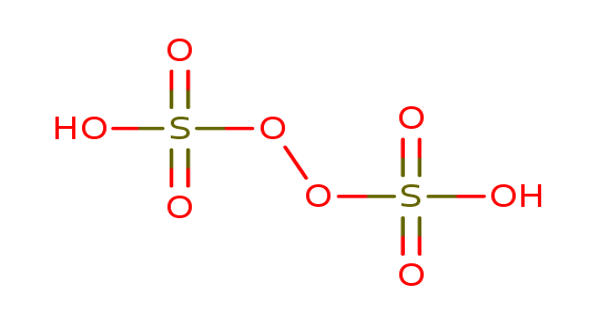 Peroxydisulfuric acid is a sulfur oxoacid. It is an inorganic compound with a chemical formula H2S2O8. It is the conjugate acid of peroxydisulfate. Also called Marshall’s acid after its inventor Professor Hugh Marshall, it is a sulfur oxoacid. In structural terms, it can be written HO3SOOSO3H. It is a solid that melts at 65°C. It is a colorless solid and its salts are strong oxidizing agents, and the acid is not very stable.

The acid and its salts are such strong oxidizing agents that combustible materials can be ignited by them. It contains sulfur in its +6 oxidation state and a peroxide group. The usual salts that are widely used as oxidizing agents are the sodium, potassium, and ammonium salts. Its salts, commonly known as persulfates, are industrially important as powerful oxidizing agents.

It can be generated from potassium or ammonium persulfate in acidic solution. It is an anhydride of sulphuric and peroxydisulfuric acid and may be prepared by oxidation of oleum with ozone or hydrogen peroxide.

The solid form is much difficult to obtain and is more often encountered as a solution.

The acid is prepared by the reaction of chlorosulfuric acid with hydrogen peroxide:

Another method is the electrolysis of moderately concentrated sulfuric acid (60-70%) with platinum electrodes at high current density and voltage:

Peroxydisulfuric Acid dissolves in water forms hydrogen peroxide and sulphuric acid. The chemical equation is given below.