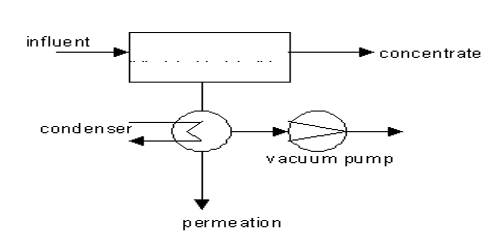 Pervaporation is a processing method for the separation of mixtures of liquids by partial vaporization through a non-porous or porous membrane. It is a mature technology today, with several applications with proven performance. It is a process in which a liquid stream -containing two or more components-contacts one side of a non-porous or ultramicroporous membrane, while vacuum or sweep gas is applied to the other side.

Separation of liquid mixtures by partial vaporization through a membrane (nonporous or porous) is the separation principle in pervaporation. It is reaching industrial maturity due to the accumulated experience in membrane manufacture and operation of pervaporation units. The term pervaporation is a portmanteau of the two steps of the process:

(a) permeation through the membrane by the permeate, then

(b) its evaporation into the vapor phase.

This process is used by a number of industries for several different processes, including purification and analysis, due to its simplicity and in-line nature. In the pervaporation process, a liquid feed stream is first preheated to operating temperature and then routed to a membrane module.  The membrane acts as a selective barrier between the two phases: the liquid-phase feed and the vapor-phase permeate. It allows the desired component(s) of the liquid feed to transfer through it by vaporization. The separation of components is based on a difference in the transport rate of individual components through the membrane. Membrane separation can occur provided a driving force has been created and sustained.

Pervaporation is effective for diluting solutions containing trace or minor amounts of the component to be removed. Based on this, hydrophilic membranes are used for dehydration of alcohols containing small amounts of water and hydrophobic membranes are used for removal/recovery of trace amounts of organics from aqueous solutions. is an important membrane separation unit of operation, whose performance and selectivity have made rapid improvements, especially due to the newly prepared membranes with better separation properties. In the more general case, a gradient of chemical potential across the membrane thickness serves as this driving force.

The method of pervaporation combines, in single unit operation, selective membrane permeation of species with their subsequent evaporation – i.e., it concentrates as it separates. Pervaporation is efficient energy conserving alternative to processes such as distillation and evaporation. It allows the exchange of two phases without direct contact. It differs from the other membrane processes in the fact that the diffusing species undergo a phase change as they diffuse through the membrane.