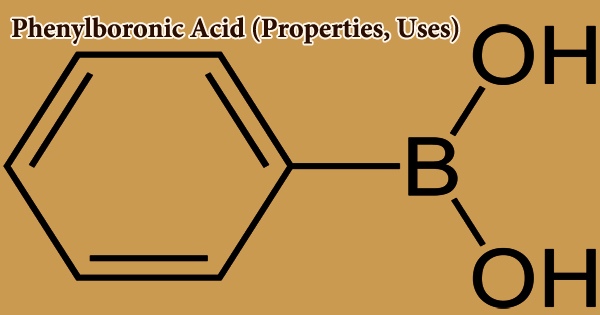 Sugars and other diol compounds can be bound by phenylboronic acid (PBA) and its derivatives to produce cyclic boronate esters. Most polar organic solvents are soluble, while hexanes and carbon tetrachloride are insoluble. The molecular symmetry of this planar molecule is idealized C2V. Negative charges are present in these esters. Sugars can be identified via electrochemical and optical methods as a result of this reaction.

The boron atom has an unfilled p-orbital and is sp2-hybridized. Hydrogen bonding is used to produce units made up of two molecules in orthorhombic crystals. An extended hydrogen-bonded network is created by combining these dimeric particles. The molecule is planar, with a slight bend of 6.6° and 21.4° around the C-B bond for the two PhB(OH)2 molecules, respectively. Reagentless electrochemical sensors have been built using PBA modified electrodes. PBA is absorbed as a self-assembled monolayer film or a polymer thin film on the electrode surface.

Phenylboronic acid can be made in a variety of ways. The ester PhB(OMe)2, which is subsequently hydrolyzed to the product, is formed by combining phenylmagnesium bromide with trimethyl borate.

PBA is modified with a chromophore that should change its characteristics when reacting with sugar for optical detection methods for sugar detection. Electrophilic borates are used to trap phenylmetal intermediates from phenyl halides or from directed ortho-metalation in other methods to phenylboronic acid. Phenylsilanes and phenylstannanes react with BBr3 to produce phenylboronic acid, which is then hydrolyzed.

Transition metal catalysts can be used to combine aryl halides or triflates with diboronyl reagents. Transition metal catalysts can also be used to functionalize aromatic C-H. The coupling process can also be carried out in the water because this phenylboronic acid is water-soluble. Many organic substituents, such as esters, ketones, alcohols, and others, are compatible with Grignard reagents, allowing them to be used in coupling processes.

Copolymerization of 4V-vinyl-2-pyrrolidone (NVP) with 3-(acrylamide)phcnylhoronic acid yielded a copolymer containing phenylboronic acid (PBA) molecules. Because the complexes between the NVP-PBA copolymer and PVA decomposed in response to the glucose concentration, we were able to create glucose-sensitive insulin release systems. Boronic esters are formed when boronic acids and alcohols combine. The hydroxyl group is simply replaced by alkoxy or aryloxy groups in this transition.