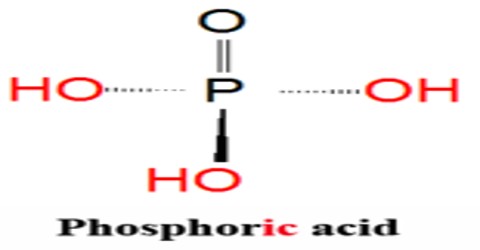 Phosphoric Acid is a clear liquid, or a solid that forms colorless, rhombus-shaped crystals, that is used in fertilizers, detergents, food flavoring, and pharmaceuticals. Chemical formula: H 3 PO 4. It is also used in dental cements, in the preparation of albumin derivatives, and in the sugar and textile industries. Among many applications, phosphoric acid is used: Storage and Side Effects of Phosphoric Acid

Store H3PO4 in containers made of corrosion-resistant materials. Sigma-Aldrich recommends storing phosphoric acid in a stainless-steel container with a resistant inner lining. Containers should always be stored upright to avoid leaks. Do not store in incompatible metals such as aluminium, the alloys of aluminium, and carbon steel. Store away from all incompatible chemicals and compounds. Keep away from food and foodstuffs. Ensure any solid material is kept dry. Do not reuse containers, even if they appear clean and empty.

Phosphoric Acid has been conducted so far are contradictory, but many have found links between consumption of cola-type soft drinks and kidney disease, kidney stones or osteoporosis. It is assumed that one of the causes of osteoporosis is the fact that this substance makes it difficult for the body to absorb calcium and magnesium, it binds to these minerals in the digestive tract, forming compounds that can not be absorbed. Osteoporosis and related fractures represent major public health problems. The lifetime risk of fracture exceeds 13 percent for men and 40 percent for women, and hip fractures have been linked with an excess mortality of up to 20%.