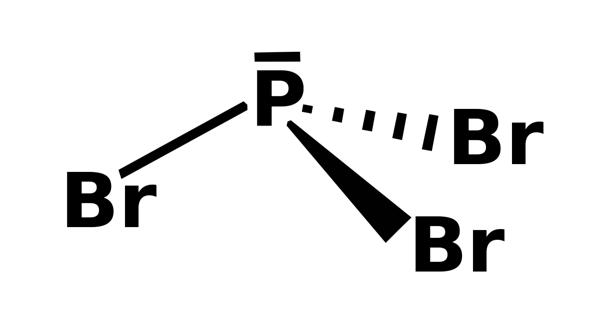 Phosphorus tribromide is a colourless liquid with the formula PBr3. It is an inorganic colorless liquid. It appears as a colorless fuming liquid with a pungent odor. The liquid fumes in moist air due to hydrolysis and has a penetrating odour. It is a corrosive, fuming, colorless liquid with penetrating aroma; soluble in acetone, alcohol, carbon disulfide, and hydrogen sulfide; decomposes in water; used as an analytical reagent to test for sugar and oxygen. It is used in the laboratory for the conversion of alcohols to alkyl bromides.

Phosphorus tribromide is colorless liquid, which fumes in air and immiscible with water, though it hydrolyzes slowly in it.

Phosphorus tribromide can be made by reacting elemental bromine with red phosphorus. PBr3 is prepared by treating red phosphorus with bromine. An excess of phosphorus is used in order to prevent formation of PBr5:

Because the reaction is highly exothermic, it is often conducted in the presence of a diluent such as PBr3. Make sure to add an excess of red P to prevent phosphorus pentabromide from forming.

Phosphorus tribromide, like PCl3 and PF3, has both properties of a Lewis base and a Lewis acid. For example, with a Lewis acid such as boron tribromide it forms stable 1:1 adducts such as Br3B · PBr3. At the same time PBr3 can react as an electrophile or Lewis acid in many of its reactions, for example with amines. Its boiling point is 347°F (175°C) and freezing point -40°F (-40°C).

The most important reaction of PBr3 is with alcohols, where it replaces an OH group with a bromine atom to produce an alkyl bromide. All three bromides can be transferred.