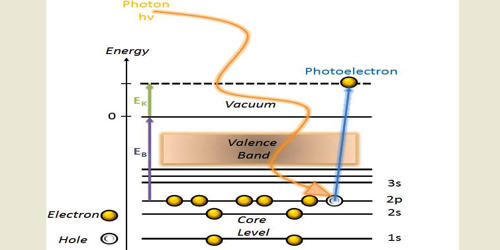 Photoemission spectroscopy (PES) is an experimental technique used to determine the relative energies of electrons in atoms and molecules. It refers to the process in which an electron is removed from a specimen after the atomic absorption of a photon. PES also is known as photoelectron spectroscopy, refers to energy measurement of electrons emitted from solids, gases or liquids by the photoelectric effect, in order to determine the binding energies of electrons in a substance. Photoelectron spectrometers work by ionizing samples using high-energy radiation (such as UV or x-rays) and then measuring the kinetic energies [KE] of the ejected electrons. The term refers to various techniques, depending on whether the ionization energy is provided by an X-ray photon, a EUV photon, or an ultraviolet photon. The peaks in a PES spectrum correspond to electrons in different subshells of an atom. Regardless of the incident photon beam, however, all photoelectron spectroscopy revolves around the general theme of surface analysis by measuring the ejected electrons. The peaks with the lowest binding energies correspond to valence electrons, while the peaks with higher binding energies correspond to core electrons. It is the energy measurements of photoelectrons emitted from solids, gases, or liquids by the photoelectric effect.

Because of the high frequency of the light, and the substantial charge and energy of emitted electrons, photoemission is one of the most sensitive and accurate techniques for measuring the energies and shapes of electronic states and molecular and atomic orbitals. The energy required to eject an electron from the sample is known as the electron’s ionization energy or binding energy. We know the energy of the radiation (h\nuhνh, \nu) used to eject the electron. Photoemission is also among the most sensitive methods of detecting substances in trace concentrations, provided the sample is compatible with ultra-high vacuum and the analyte can be distinguished from the background. It differs from the conventional methods of spectroscopy in that it detects electrons rather than photons to study electronic structures of a material.