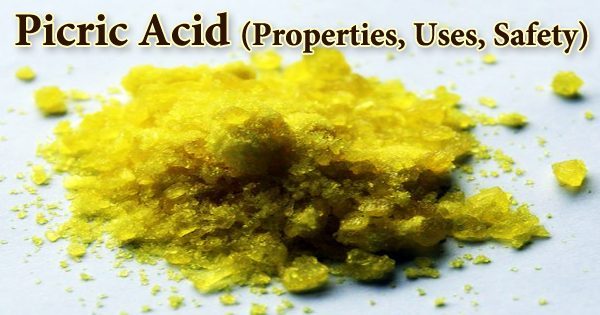 Picric acid is an organic molecule having the formula (O2N)3C6H2OH, also known as 2,4,6-trinitrophenol. It’s a white to yellowish crystalline compound that’s combustible and soluble in most organic solvents. It’s been employed as a military explosive, a yellow dye, and an antibiotic, among other things. The name “picric” comes from the Greek word πικρός (pikros), meaning “bitter,” due to its bitter taste. It’s one of the phenols with the highest acidity. It reacts with metals to generate metal picrates, which are just as sensitive as picric acid.

Picric acid should be kept properly sealed (to avoid drying out) in a cool, well-ventilated location away from fire threats and quickly oxidized materials. Skin and mucous membranes may be irritated. It was presumably originally mentioned in Johann Rudolf Glauber’s alchemical writings, and it may be hazardous if consumed. It was first manufactured by nitrating items including animal horn, silk, indigo, and natural resin, with Peter Woulfe (an Irish scientist and mineralogist) performing the first indigo synthesis in 1771.

Picric acid is frequently employed as a tissue fixative (Bouin solution) for histology specimens, as well as a booster to detonate a less sensitive explosive like trinitoluene (TNT). In 1799, French chemist Jean-Joseph Welter (1763–1852) discovered that potassium picrate might explode after treating silk with nitric acid. C6H2(N02)3OH, also known as picronitric acid, trinitrophenol, nitroxanthic acid, carbazotic acid, or phenoltrinitrate, is a yellow crystal with a harsh taste that is soluble in water, alcohol, chloroform, benzene, and ether.

It (or its salts containing heavy metals as copper, silver, or lead) can explode when subjected to percussion or quick heating. Chemists didn’t think of using picric acid as an explosive until 1830. Chemists previously assumed that only the salts of picric acid, not the acid itself, were explosive. It’s made by nitrating phenolsulfonic acid, which is made by heating phenol with strong sulfuric acid, and it’s used to make explosives, matches, electric batteries, and copper etching.

Picric acid was the first highly explosive nitrated organic compound widely regarded as capable of withstanding the shock of normal cannon discharge. The dry compound is a powerful explosive with high sensitivity. For storage, handling, and transportation, the water mixture is regarded safe. A number 8 electric blasting cap can be used to detonate it.  Picric acid is a white to a yellowish crystalline chemical that is highly combustible. It’s used to make fireworks, matches, electric batteries, colored glass, explosives, and disinfectants, among other things. Picric acid is also used in the pharmaceutical, textile, and leather industries.

The major threat is a blast, in which the entire weight explodes at once, rather than fragments from flying missiles. When exposed to heat for an extended period of time, it has the potential to explode. Picric acid is commonly found in a solution containing 10% to 20% water. The crystalline form is exceedingly unstable, thus it must be maintained wet. The Battle of Omdurman, the Second Boer War, the Russo-Japanese War, and World War I all included it. The importance of phenol, the precursor to picric acid, is highlighted by efforts to regulate its availability during World War I.

Picric acid is a C-nitro chemical made up of phenol with three nitro substituents at positions 2, 4, and 6. Attempts to nitrate phenol, even with weak nitric acid, result in the creation of large molecular weight tars because the aromatic ring of phenol is activated towards electrophilic substitution processes. Anhydrous phenol is sulfonated using fuming sulfuric acid, and the resultant p-hydroxyphenylsulfonic acid is subsequently nitrated with strong nitric acid to reduce side reactions. It can be used as an explosive, antiseptic, or fixative. It’s made up of phenol and 1,3,5-trinitrobenzene. It’s a picrate anion’s conjugate acid.

Direct nitration of 2,4-Dinitrophenol with nitric acid is another way to make picric acid. Explosives are made from picric acid and its metal salts. It’s also utilized in the production of matches, electric batteries, tinted glass, etching copper, and textile dyeing. It was also utilized to extract insulin from human tissue as a solvent. It’s been used in organic chemistry to make crystalline salts of organic bases (picrates) for the goal of identifying and characterizing them.

Picric acids are extremely sensitive to heat, stress, or friction, and their explosive nature makes them one of the most dangerous laboratory compounds. Bouin solution is a typical fixative solution for histology specimens that contains picric acid. It improves the staining of acid dyes, but it can also cause any DNA in the sample to be hydrolyzed. Picric acid has a somewhat higher explosive power than TNT, both in terms of blast strength and detonation velocity.

Because dry picric acid is vulnerable to stress and friction, laboratories that use it keep it in bottles with a layer of water on top to keep it safe. Some are poisonous, and if inhaled, eaten, or absorbed through the skin, they can be lethal. Skin and eye burns may result from contact. Gases that are unpleasant, caustic, and/or toxic may be produced by the fire. Pollution may be caused by runoff from firefighting or diluting water. Picric acid can easily create metal picrate salts, which are considerably more sensitive and toxic than the acid itself, hence glass or plastic bottles are necessary. Picric acid is particularly harmful in the workplace since it is highly volatile and slowly sublimes even at room temperature.

Irritation and corneal damage can result from contact with the eyes. Sensitization dermatitis can be caused by skin contact with the powder. If picric acid has dried out, bomb disposal units are frequently called in to dispose of it. When heated, closed containers may explode violently. It’s used to make dyes, as a narcotic, to make explosives and matches, to etch copper, and to make colored glass, among other things. Controlled burning in a rotary kiln incinerator with particulate filtration and wet scrubbers.