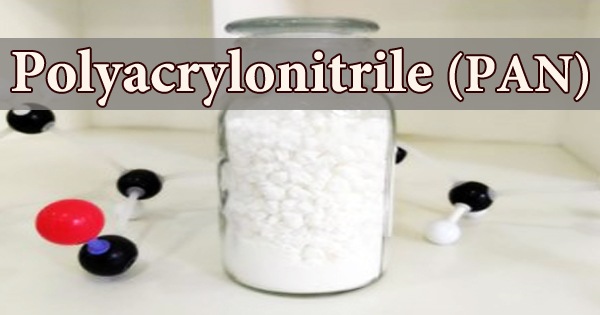 Polyacrylonitrile (PAN), commonly known as polyvinyl cyanide and Creslan 61, is a synthetic resin made from acrylonitrile polymerization. It has the linear formula (C3H3N)n and is a synthetic semicrystalline organic polymer resin. It is a strong, stiff thermoplastic substance that is resistant to most solvents and chemicals, slow to burn, and has low gas permeability. It is a member of the significant family of acrylic resins. Despite the fact that it is thermoplastic, it does not melt under typical circumstances. Before melting, it degrades. If the heating rates are 50 degrees per minute or higher, it melts over 300 degrees Celsius.

PAN belongs to the acrylic resin family. Because of the strong chemical connections established between the nitrile groups, it is thermoplastic and resistant to most solvents and chemicals. PAN resins are almost all copolymers produced from monomer combinations with acrylonitrile as the primary monomer. It’s a versatile polymer that’s used to make ultrafiltration membranes, hollow fibers for reverse osmosis, textile fibers, and oxidized PAN fibers, among other things. The raw material for the PAN fiber gel spinning method is generally acrylonitrile homopolymer or copolymer with a high molecular weight.

PAN fibers are the chemical precursor of very high-quality carbon fiber. Carbon fibers are used in a variety of high-tech and everyday applications, including civil and military aircraft primary and secondary structures, missiles, solid propellant rocket motors, pressure vessels, fishing rods, tennis rackets, and bicycle frames. They are first thermally oxidized in air at 230 °C to form an oxidized PAN fiber and then carbonized above 1000 °C in an inert atmosphere to form carbon fibers. Propylene (CH2=CHCH3) is converted to acrylonitrile (CH2=CHCN) by reacting it with ammonia (NH3) and oxygen in the presence of catalysts.

PAN is a very poisonous, flammable liquid that is also a recognized carcinogen if consumed. It’s a component repeat unit in a number of major copolymers, including styrene-acrylonitrile (SAN) and acrylonitrile butadiene styrene (ABS). It is a versatile polymer that may be used to make a variety of goods, including textile fibers, ultrafiltration membranes, carbon fiber, and reverse osmosis hollow fibers. The PAN fiber generated by the gel spinning method is free of flaws and has a high degree of orientation, as well as mechanical characteristics comparable to aromatic polyamide fiber.

In the Ludwigshafen facilities of the German chemical company IG Farben, Hans Fikentscher and Claus Heuck produced polyacrylonitrile (PAN) for the first time in 1930. However, because PAN is non-fusible and does not dissolve in any of the commonly used industrial solvents, further study into the material was put on hold. Almost all PAN used in commercial applications is a copolymer made by combining acrylonitrile with other monomers, most often vinyl esters (vinyl acetate, methyl acrylate, and methyl methacrylate) in textiles. DuPont, an American chemical corporation, produced the first mass production run of PAN fiber in 1946.

Its homopolymer can be utilized as fibers in outdoor awnings, boat sails, and fiber-reinforced concrete, among other things. It may also be used to make textiles that are naturally flame-resistant (FR). Polar solvents, such as dimethylformamide, dimethylacetamide, ethylene, and propylene carbonates, are soluble in PAN. Nitric acid, sodium thiocyanate, and zinc chloride Solubility parameters: 26.09 MPa1/2 (25 °C) are 25.6 to 31.5 J1/2 cm−3/2. Dielectric constants: 5.5 (1 kHz, 25 °C), 4.2 (1 MHz, 25 °C).Can behave as branched as well as linear polymer.

Acrylamide, vinylpyrrolidone, and itaconic acid are commonly utilized in carbon fiber applications. Vinyl chloride and vinylidene chloride are utilized in anti-flame modacrylic fibers. The majority of commercial PAN synthesis techniques rely on acrylonitrile free radical polymerization. Small quantities of other vinyl comonomers (1–10 percent) are frequently employed in conjunction with AN, depending on the ultimate application. Anionic polymerization can also be employed to make PAN.

Molecular weights in the region of 40,000 to 70,000 are utilized in textile applications. Greater molecular weight is required for the production of carbon fiber. In terms of thermal stability, PAN fiber is inferior to aromatic polyamide fiber, carbon fiber, and glass fiber, but far superior to PE fiber. In temperatures exceeding 130 °C, the strength is unaffected. Furthermore, PAN fiber possesses outstanding anti-alkaline and lightfastness characteristics. The linear density of filaments is 0.12 tex and the filament diameter is 11.6 m in the manufacture of carbon fibers using 600 tex (6k) PAN tow, resulting in carbon fiber with a filament strength of 417 kgf/mm2 and a binder concentration of 38.6%.

Among the characteristics to be highlighted in the Polyacrylonitrile (PAN):

Polyacrylonitrile homopolymers have been utilized in hot gas filtration systems, outdoor awnings, boat sails, and fiber-reinforced concrete. Almost all PAN resins are copolymers made up of monomers, the most common of which is acrylonitrile. It’s a versatile polymer that’s used to make textile fibers, ultra-filtration membranes, and hollow fibers for reverse osmosis, among other things. PAN absorbs a wide range of metal ions and facilitates the use of absorption materials. Because of their ability to form complexes with metal ions, polymers containing amidoxime groups can be utilized to treat metals.

Under normal settings, PAN does not melt and degrades before melting. Modacrylics are acrylics that have been modified with halogen-containing comonomers and include higher than PAN levels of 35-85% by definition. PAN fibers may keep their fibrillar structure when heated slowly and the heat emitted is absorbed, but when heated over 1000oC, they are converted into carbon fibers with a content of more than 90% of this element. As a result of this characteristic, PAN is the ideal polymer for making carbon fiber.

PAN is used as a porous supporting polymer for adsorbents in a number of applications, including ion exchange for the cleanup of nuclear waste. Due to the cyclization and creation of conjugated bonds in the polymer chain, it might take on a yellowish hue that leans to black depending on the temperature. Fabrics that are naturally flame-resistant (FR) are made using oxidized PAN Fiber. OPF (oxidized polyacrylonitrile fiber) is a high-performance, cost-effective flame and heat resistance solution that is commonly utilized in FR textiles for protective clothing. By employing the bicomponent spinning method in fiber preparation, PAN fiber may achieve the crimp structure of wool.