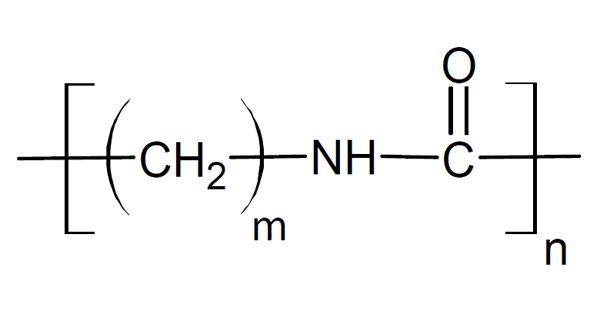 A polyamide is a polymer with repeating units linked by amide bonds. It is any polymer in which the repeating units in the molecular chain are linked together by amide groups. Polyamides are polymers which contain repeating amide, -CO-NH-, linkages. Proteins are examples of naturally occurring polyamides. These are used as films for their good balance between mechanical strength and barrier properties against oxygen, smells and oils, for example for food packaging. It is a polymer resin that can occur naturally (e.g. wool, silk) or manufactured synthetically (e.g. nylon).

Polyamide is a polymer, which contains recurring amide groups (R—CO—NH—R) as integral parts of the main polymer chain.

Polyamides occur both naturally and artificially. Amide groups have the general chemical formula CO-NH. They may be produced by the interaction of an amine (NH2) group and a carboxyl (CO2H) group, or they may be formed by the polymerization of amino acids or amino-acid derivatives. A polymer produced by the reaction of the amino group (NH2) from one molecule with the carboxylic acid group (CO2H) from another molecule. Examples of naturally occurring polyamides are proteins, such as wool and silk. The best known manufactured polyamides are often called nylons (the trade name given by the manufacturer, DuPont) and these are aliphatic polyamides. The resulting structure is similar to that of a protein. Silk is a naturally occurring polyamide, and nylon is a synthetic polyamide.

Polyamides are polymers where the repeating units are held together by amide links. Artificially made polyamides can be made through step-growth polymerization or solid-phase synthesis yielding materials such as nylons, aramids, and sodium poly(aspartate). Broadly defined, the polyamides include proteins and peptides, which are naturally produced polymers consisting of amino-acid repeating units. They are produced both in solid form and as fibers.  The fibers, which account for more than half of the polyamides manufactured, are produced in a variety of forms, as textile filament (for clothing), as carpet filament, and as industrial filament (for example, for ropes).

Synthetic polyamides are commonly used in textiles, the automotive industry, carpets, kitchen utensils, and sportswear due to their high durability and strength. The growth in the use of polyamides in recent years comes from their increasing use in the automotive industry (for example, battery casings, brake hoses, oil sumps, and fenders).  This reduces vehicle weight which in turn decreases fuel consumption and thus reduces pollution in the atmosphere. The transportation manufacturing industry is the major consumer, accounting for 35% of polyamide (PA) consumption.