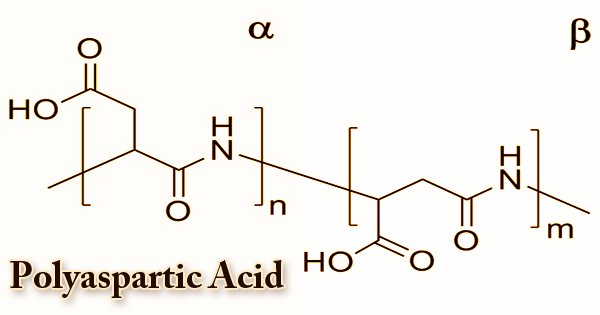 Thermal condensation of aspartic acid-catalyzed polymerization of aspartic acid, and thermal polymerization of maleic acid and ammonium hydroxide are the three primary methods for the industrial processing of poly(aspartic acid). PASA was discovered in nature as fragments of larger proteins with a length of up to 50 amino acids, but was not isolated from any natural source as a pure homo-polymeric substance as of 2004. In the process of thermal condensation, by heating the acid to a temperature above 180oC, the aspartic acid is first converted to poly(succinimide). Then poly(succinimide) is converted by alkaline hydrolysis into poly(aspartic acid). It was later suggested that the process of thermal polymerization leads to intermediate polysuccinimide. 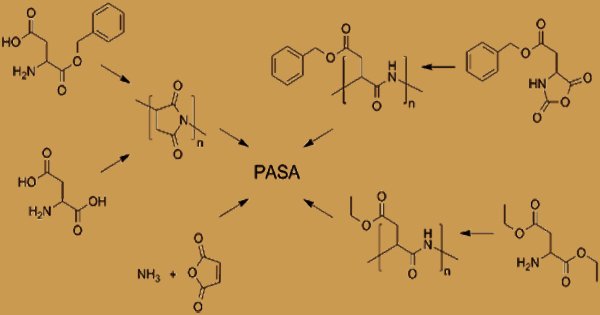 In the late 19th century, Hugo Schiff reported the first isolation of synthetic oligomeric polyaspartate sodium, obtained by thermal polycondensation of aspartic acid. In biomedical implants, polymer degradation products can be harmful. The risk of associated toxicity can be minimized because poly(amino acids), such as poly(aspartic acid), contain naturally occurring components. In both the acid type and the sodium polyaspartate salt, polyaspartic acid is produced industrially. Poly(aspartic acid) has possible biomedical uses, including use in dialysis membranes, artificial skin, drug delivery systems, and orthopedic implants as a material component.

Until recently, it was widely assumed that poly(aspartic acid) synthesis resulted in a polymer with one form of peptide bond via the process mentioned above. As a trifunctional monomer, aspartic acid can be bound by an α-peptide, a β-peptide, or an imide bond in poly(aspartic acid). Depending on the method of preparation, the structure, chemical features, and properties of a poly(aspartate). Several other related poly(aspartate) preparation methods are documented in the literature. It is an anionic polyelectrolyte due to the presence of carboxyl groups. PASA fragments that naturally occur consist of α,-linked L-aspartatic acid. On the other hand, in four isomeric forms, a repeating unit of synthetic polyaspartic acid can exist, depending on the stereochemistry of the starting material (D- and L-aspartic acid) and the synthetic procedure leading to the bonds of α and β.

Polymerization creates polysuccinimide, which can be hydrolyzed to form PAA in the presence of a base. Up to 99 percent conversion of aspartic acid to polyaspartate has been shown to yield the overall process. A copolymer with 70% of the amide bonds formed from α -carboxyl groups and 30% from α -carboxyl groups was shown to be the resulting thermal polyaspartate (TPA). Thermal polymerization of maleic acid derivatives under microwave irradiation provides a new, initial method of synthesis of polyaspartic acid. The reaction required the following steps: to give maleic acid, maleic anhydride is hydrolysed in water (step 1), and then converted to ammonium derivatives by adding ammonium hydroxide (step2). Temperatures of 100°C are needed for stages 1 and 2.

In this way, maleic acid ammonium salt or/and amide is obtained. The cyclic product is formed, namely anhydro-poly(aspartic acid) (step3). The polymerization temperature is progressively increased in order to achieve a high polycondensation yield. By way of distillation, water from the reaction is extracted. Finally, after hydrolysis of the cyclic form at room temperature, linear polyaspartic acid is obtained (step 4). Anhydropoly(aspartic acid) hydrolysis leads to peptide bonds containing poly(aspartate). The resulting polysuccinimide is treated with aqueous sodium hydroxide in the subsequent level, resulting in the partial opening of the succinimide rings.

Many catalysts for improving the method of thermal polymerization have been reported. The main advantages of their application are the increase in the conversion rate and the product’s greater molecular weight. Methods of producing polyaspartate crosslinked polysuccimide super absorbent polymer networks using an organic base containing at least two primary amine groups have been documented. Polyaspartic acid can also be synthesized in the presence of ammonium hydroxide by the polymerisation of maleic anhydride. Polymerization of N-carboxyanhydride (NCA) derivatives, polymerization of aspartic acid esters or the application of enzyme-catalyzed reactions may gain high control over repeated unit isomers. Using these approaches, pure homopolymers, D- or L-PASA with α or β-links only, can be synthesized.

Polyaspartic acid is an ecologically benign agent for the degradation of deposits of calcium salt. By conducting potentiometric titration against polyaspartic acid solutions, the chelating ability of polyaspartic acid with calcium is examined. At pH7, polyaspartic acid is found to be completely deprotonated. The use of these polymers as a totally biodegradable water-soluble component in detergents and other cleaning products is an important area of application for polyaspartats. PASA has the ability to prevent calcium carbonate, calcium sulfate, barium sulfate, and calcium phosphate deposition and can be used as an anti-scaling agent in the treatment of cooling water systems, water desalination procedures, and wastewater.

Superabsorbant products, including polyamino acids, have been made from poly(amino acids) (aspartic acid). These materials are more capable of absorption than comparable goods currently available and can be used as agricultural, sanitary and construction materials. As poly(anhydroaspartic acid) is hydrolyzed at a pH of 10 and 60oC to form poly(aspartic acid), the superabsorbant is manufactured, which is then mixed with L-aspartic acid and lysine-HC1. Heating under a nitrogen atmosphere at 220oC for 24 h creates a superabsorbant content.

Furthermore, polyaspartic acid provides corrosion inhibition due to its capacity to chelate metal ions. In diapers, feminine hygiene products, and food packaging, it can act as a super-swelling material. Recent studies have shown that some polyaspartate variants increase the absorption of foliar and soil insecticides, as well as pre-emergence and post-emergence herbicides, and thus their efficacy. In greenhouse and field experiments, the practicality of such advantages has been shown successfully. Polyaspartate is compatible with most traditional insecticides and herbicides, and conventional sprayers can also be tank-mixed and applied.