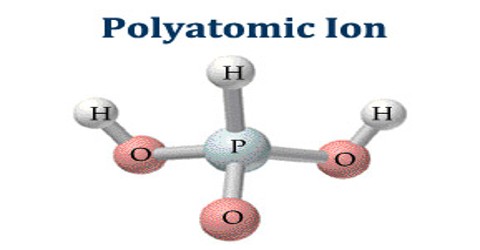 A polyatomic ion is also referred to as a radical, and less commonly, as a radical group. In contemporary usage, the term radical refers to free radicals that are species with an unpaired electron.

Polyatomic ions form when a molecule needs to gain or lose electrons, so that all atoms inside the molecule can achieve the octet rule. In nature, polyatomic ions are incredibly common. The atoms which are covalently bonded stay together when the ion forms an ionic bond to an ion with opposite charge. OH– Hydroxide Anion: Hydroxide ion is a very strong base.  A base is a proton (hydrogen ion) acceptor.  An acid is a proton (hydrogen ion) donor. The oxygen and hydrogen share a covalent bond so they stay bonded together.  Overall the hydroxide ion has a negative charge so there must be an associated cation to balance the charge. The number of OH– anions which bind with the cation will depend on the charge of the cation.

NO3– Nitrate Anion: Nitrogen is in group VA of the periodic table and has 5 valence electrons. Like oxygen, nitrogen is in period 2 and it cannot expand its octet.  This explains why there is only a single bond between the nitrogen and 2 of the oxygen atoms.

NH4+ Ammonium Cation: Nitrogen is in group VA of the periodic table and has 5 valence electrons in its natural state.  In the ammonium ion, nitrogen has lost one of its electrons and therefore has a positive charge of +1.

H3O+ Hydronium Cation: Oxygen is in periodic table group VIA and has 6 valence electrons in its natural state.  Therefore in the hydronium ion, oxygen has lost one of its electrons (reduced from 6 to 5).  This gives the overall hydronium ion a +1 formal charge. The electron which was paired in the natural state was “lost” to the associated anion.

HCO3– Hydrogen (bi) Carbonate Anion: Commonly used bicarbonate is sodium bicarbonate or baking soda in which case sodium is the associated cation.  In this Lewis structure of the bicarbonate anion, the oxygen on the left has picked up an additional electron, giving it a full octet but with a negative charge.  Bicarbonate ion is a buffer. Polyatomic ions are everywhere! Bicarbonate ions, HCO3−, help maintain the pH level of our blood, while phosphates, PO43−, are extremely important in various metabolic processes. Being familiar with the names, charges, and formulas of the most common polyatomic ions will be helpful for recognizing ionic compounds and predicting their reactivity.

Many of the common polyatomic anions are conjugate bases of acids derived from the oxides of non-metallic elements. For example, the sulfate anion, SO42−, is derived from H2SO4, which can be regarded as SO3 + H2O.

Examples of some common polyatomic ions are given below: