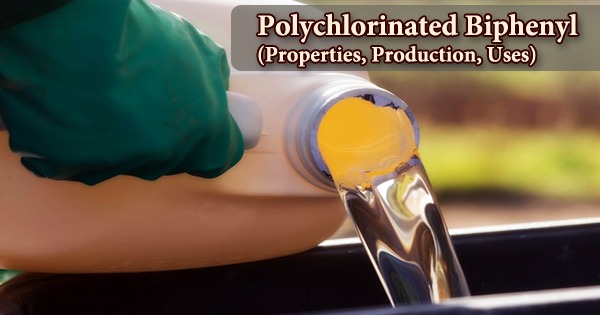 Polychlorinated biphenyls (PCBs) are a class of man-made organic compounds that include carbon, hydrogen, and chlorine. C12H10-xClx is the formula for an organic chlorine compound. Based on adequate evidence of carcinogenicity from research in experimental animals, PCBs are reasonably expected to be human carcinogens. In experimental animals, not all PCB combinations produced tumors. PCBs were previously commonly used in electrical apparatus, carbonless copy paper, and heat transfer fluids as dielectric and cooling fluids.

Many of a PCB’s physical and chemical characteristics are determined by the amount of chlorine atoms and their position inside the molecule. PCBs are colorless, viscous liquids that can include over 100 different chemicals. The combination is moderately water-insoluble, stable at high temperatures, and has strong dielectric properties (electrical insulator). PCBs are particularly useful as lubricants, heat-transfer fluids, and fire-resistant insulating fluids in transformers and capacitors because of their properties. PCBs are still widely used due to their extended lifespan, despite the fact that their production has decreased dramatically since the 1960s when a slew of issues were discovered.

Several investigations have found relatively high amounts of PCBs in occupationally exposed persons’ serum or adipose tissues, such as >3000 ppb in the serum. The PCB serum concentrations tended to drop once these exposures were stopped, which was not surprising. PCB manufacturing was outlawed by US federal law in 1978, and by the Stockholm Convention on Persistent Organic Pollutants in 2001, following the revelation of their environmental toxicity and designation as persistent organic pollutants.

PCBs are odorless and tasteless, with a viscosity that ranges from an oil to a waxy solid. PCBs have been classified as definite carcinogens in humans by the International Agency for Research on Cancer (IARC). There was also a progressive drop in the severity and quantity of dermatological issues in exposed employees when occupational exposure to PCBs was stopped, which coincided with a decrease in their PCB blood levels. PCBs have been found in many rivers and structures, including schools, parks, and other locations, and food supplies have also been polluted.

Occupational exposure to PCBs has been shown to affect the concentrations of many serum clinical, chemical, and hematological markers. PCBs are part of the chlorinated hydrocarbons family of man-made organic compounds. Some PCBs have a structural resemblance to dioxins, as well as a hazardous mechanism of action. Endocrine disruption (specifically, inhibiting thyroid system function) and neurotoxicity are among recognized side effects.

During the 1930s and 1940s, PCBs were widely used, but rising worries about their safety finally led to a ban on their manufacturing (1979 in the United States). Polybrominated biphenyls (PBBs) are the bromine counterparts of PCBs, and they have similar uses and environmental problems. According to one research, when PCB serum levels declined over time, GGTP (γ-glutamyl transpeptidase) serum levels decreased to normal levels as well. Globally, an estimated 1.2 million tons of PCBs have been generated.

PCBs are biphenyl compounds in which one to ten hydrogen atoms have been replaced by chlorine. Physically, they range from light to dark yellow oily liquids to white crystalline solids and hard noncrystalline resins at room temperature. They come in a variety of toxicity levels and consistencies, ranging from thin, light-colored liquids to waxy yellow or black solids. PCBs were utilized in hundreds of industrial and commercial applications because to their non-flammability, chemical stability, high boiling point, and electrical insulating characteristics:

The liquids are light yellow and thick. They are hydrophobic and have poor water solubilities (Aroclors brand: 0.0027–0.42 ng/L), but they are highly soluble in most organic solvents, oils, and fats. PCBs were never meant to be discharged into the environment, yet they did so through industrial and municipal waste disposal, as well as leakage from mechanical and electrical equipment. At room temperature, they have modest vapor pressures. They have dielectric constants of 2.5–2.7, excellent thermal conductivity, and high flash points (from 170 to 380°C).

Commercial PCB formulations are complicated combinations of chlorinated biphenyls with varying degrees of chlorination, and identical compositions might differ significantly from one lot to the next. The density ranges from 1.182 to 1.566 grams per cubic meter. Melting point and lipophilicity rise as the degree of chlorination rises, whereas vapor pressure and water solubility fall. Roughly 100 of the 209 potential PCB congeners have been found in commercial PCB mixes, and about 70 in human adipose tissue.

PCBs with fewer chlorine atoms are more soluble in water, more volatile, and easier to break down. Greater biodegradation resistance is linked to a higher amount of chlorine atoms, which can lead to increased bioaccumulation in the environment. PCBs’ resistance to breakdown means that they persist for many years in soils and bodies of water, where they accumulate in the fatty tissue of species higher up the food chain. PCBs are classified as either “dioxinlike” or “non-dioxinlike” based on their capacity to mimic the biochemical and toxic consequences of TCDD by activating the aryl hydrocarbon receptor.

PCBs are difficult to break down or deteriorate, which makes them appealing to industries. PCB congeners having chlorine atoms in the meta (carbon atoms 3, 3′, 5, or 5′) and para (carbon atoms 4 or 4′) positions, with no more than one ortho (carbon atoms 2, 2′, 6, or 6′) chlorine, show dioxin-like activity; these compounds are expected to exist in a planar conformation. Acids, bases, oxidation, hydrolysis, and temperature change do not affect PCB combinations. Through partial oxidation, they can produce very poisonous dibenzodioxins and dibenzofurans.

PCBs are highly hazardous to fish and invertebrates, and even low doses are lethal to these species. PCBs are made from the chemical biphenyl, which has the formula C12H10, or (C6H5)2. PCBs are made by chlorinating biphenyl, and the resultant products are labeled according to their chlorine concentration in percent (by weight). Some hydrogen atoms in biphenyl are replaced by chlorine atoms in PCBs. In the United States, about 600 million kg of commercial PCBs were manufactured, with an estimated global output of roughly double that amount.

Humans exposed to PCBs have liver failure, rashes, and dizziness. It’s also possible that the substances are carcinogenic (cancer-causing). PCBs can still be discharged into the environment today from a variety of sources:

Commercial PCBs have a wide range of properties, from extremely fluid liquids to viscous liquids or solids. All of these preparations comprised a complex combination of isomers and congeners, and the relative quantities of the more highly chlorinated congeners rose as the degree of chlorination increased. In commercial PCB goods, there are about 130 distinct unique PCBs; toxic effects vary depending on the PCB.

PCBs and related halogenated aromatic hydrocarbons cause a wide range of toxic and biochemical responses in laboratory animals, depending on a variety of factors such as the test animal’s age, sex, species, and strain, as well as the dosing regimen. Although PCB levels in the environment have decreased since the compounds’ manufacturing and usage were restricted, there is still a risk of environmental harm since so much electrical equipment containing PCBs is still in use. PCBs are classified into two groups based on their structure and toxicity: coplanar or non-ortho-substituted arene substitution patterns and noncoplanar or ortho-substituted congeners.

PCBs may be found in items and materials manufactured before the 1979 PCB ban, despite the fact that they are no longer commercially produced in the United States. PCBs can be found in a variety of products:

Incineration is the most effective method for eliminating PCBs in abandoned equipment. Microbial degradation is being used to decrease PCB levels in soil, and progress is being achieved. PCBs were chemical compounds made up of a range of distinct chlorinated biphenyl components known as congeners, which were utilized in these goods. PCBs are only allowed to be used as a microscope mounting media, as an immersion oil in low-fluorescence microscopy, as an optical liquid, and for other research and development reasons.