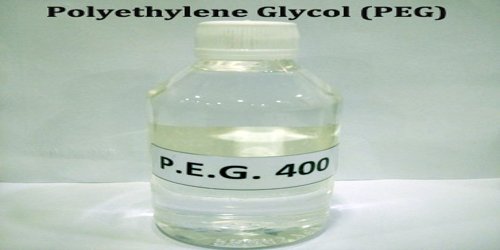 Polyethylene glycol (PEG) is any of a family of polymers that are either colorless liquids or waxy solids and are soluble in water. They are present in many organic solvents. It is also known as polyethylene oxide (PEO) or polyoxyethylene (POE), depending on its molecular weight. The structure of PEG is commonly expressed as H−(O−CH2−CH2)n−OH. Polyethylene glycols are used in detergents, cosmetics, and as emulsifiers and plasticizers. Polyethylene glycol (PEG) and Polyethylene oxide (PEO) are liquids or low-melting solids, depending on their molecular weights. While PEG and PEO with different molecular weights find use in different applications, and have different physical properties (e.g. viscosity) due to chain length effects, their chemical properties are nearly identical. Different forms of PEG are also available, depending on the initiator used for the polymerization process – the most common initiator is a monofunctional methyl ether PEG, or methoxypoly (ethylene glycol), abbreviated mPEG. Lower-molecular-weight PEGs are also available as purer oligomers, referred to as monodisperse, uniform, or discrete. Very high purity PEG has recently been shown to be crystalline, allowing determination of a crystal structure by x-ray diffraction. Since purification and separation of pure oligomers is difficult, the price for this type of quality is often 10–1000 fold that of polydisperse PEG.

Mixing solid and liquid polyethylene glycol can make ointments, and its solid form is often used in tablet coatings. It has many uses in the preparation of tablets – binder, lubricant, and coating. Polyethylene glycol is a compound used as a solvent in liquids and soft capsules, and in its solid form as a base for ointments and as a binder, lubricant, and coating for tablets. Production and Uses of Polyethylene Glycol

Polyethylene oxide or high-molecular polyethylene glycol is synthesized by suspension polymerization. It is necessary to hold the growing polymer chain in solution in the course of polycondensation process. The reaction is catalyzed by magnesium-, aluminium- or calcium- organoelement compounds. To prevent coagulation of polymer chains from solution, chelating additives such as dimethylglyoxime are used. Polyethylene glycols for pharmaceutical formulations are important ingredients for preparation of topical, oral, ophthalmic and rectal preparations. They are used as film coating agents and lubricants in several medical applications. Especially the solid grade polyethylene glycols are preferred as plasticizers. They can prevent rupture or damage of the coating film and therefore used in the tablet forming process. It is commonly used as a crowding agent in in vitro assays to mimic highly crowded cellular conditions. PEG is commonly used as a precipitant for plasmid DNA isolation and protein crystallization. X-ray diffraction of protein crystals can reveal the atomic structure of the proteins.

In toothpastes, the polyethylene glycols work as water binding agents that keep xanthum gum distributed uniformly in the toothpaste. The thickness of these glycols makes them important ingredients for use in paintball fills.

Depending on chemical properties of these glycols, they have several other chemical uses too. Because of their water solubility, they are used in applying osmotic pressure in biochemistry and biomembrane experiments. It’s the characteristic fragmentation pattern of these glycols for which they are preferred materials for mass spectrometry experiments. They help in preventing warping or shrinking of the wood and therefore used to preserve objects like wood that are affected by the underwater.