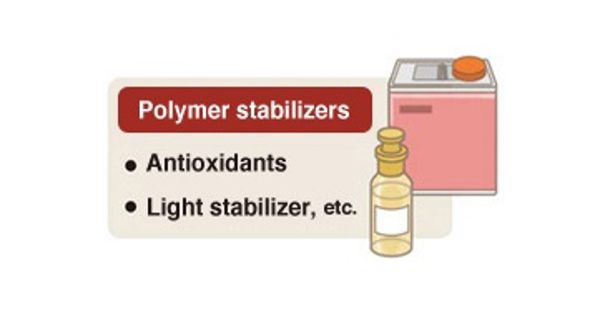 Polymer stabilizers – to prevent the degradation of polymers

In order to prevent the degradation of polymers during processing or use, polymer stabilizers are employed in accordance with the degradation mechanism of the relevant polymer. Polymer stabilizers are chemical additives that may be added to polymeric materials, such as plastics, to inhibit or retard their degradation. Every time a polymer is heated or sheared, it is in a potential state of degradation. This degradation changes the molecular weight and therefore the physical properties of the polymer. Stabilizers are subdivided into antioxidants, heat stabilizers, anti ozone agents, ultraviolet absorbers, and antirads. Most polymers are protected from degradation by their manufacturer to ensure their suitability for their designed use, including recommended processing temperatures.

Common polymer degradation processes include oxidation, UV-damage, thermal degradation, ozonolysis, combinations thereof such as photo-oxidation, as well as reactions with catalyst residues, dyes, or impurities. At the current stage of polymer products manufacture, organic antimicrobial substances are becoming more effective than inorganic ones thereby forcing the latter out of the market. All of these degrade the polymer at a chemical level, via chain scission, uncontrolled recombination, and cross-linking, which adversely affects many key properties such as strength, malleability, appearance and color. Due to the large differences in degradation mechanisms of polymers containing chlorine, and those without chlorine, stabilizers that are suitable for each type of polymer should be chosen.

The thermal stabilizer is one of the important additives to materials, especially polymers which are sensitive to high temperature. Stabilizers are used at all stages of the polymer life-cycle. In general, the same polymer stabilizers are used in most plastics, such as polypropylene, polyethylene, acrylonitrile butadiene styrene (ABS), and engineering plastics. They allow plastic items to be produced faster and with fewer defects, extend their useful lifespan, and facilitate their recycling. However, they also continue to stabilize waste plastic, causing it to remain in the environment for longer.

Stabilizers are categorized into a radical chain initiation inhibitor, a radical scavenger, and a peroxide decomposer, depending on the autoxidation stage at which the radical chain is inhibited. Many different types of plastic exist and each may be vulnerable to several types of degradation, which usually results in several different stabilizers being used in combination. The key to preventing the oxidative degradation of plastics is to terminate the radical reaction in the early stage of degradation, thereby terminating autoxidation. Even for objects made from the same type of plastic, different applications may have different stabilization requirements. Regulatory considerations, such as food contact approval are also present. A wide range of stabilizers exist is therefore needed.