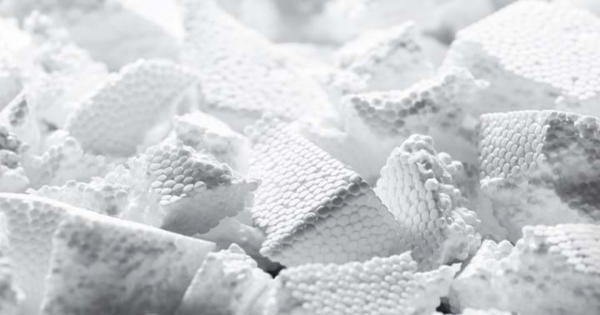 Polystyrene (PS) is a versatile plastic used to make a wide variety of consumer products. It is a synthetic aromatic hydrocarbon polymer made from the monomer known as styrene. It is widely employed in the food-service industry as rigid trays and containers, disposable eating utensils, and foamed cups, plates, and bowls. It is principally used in solid, foam, and expanded PS (EPS) forms.

Polystyrene can be solid or foamed. It is a polymer made from the monomer styrene, a liquid hydrocarbon that is commercially manufactured from petroleum. General-purpose polystyrene is clear, hard, and rather brittle. It is an inexpensive resin per unit weight. It is a rather poor barrier to oxygen and water vapour and has a relatively low melting point.

Polystyrene (PS) is a polymer made from monomer styrene, a liquid hydrocarbon that is commercially manufactured from petroleum.

As a thermoplastic polymer, polystyrene is in a solid (glassy) state at room temperature but flows if heated above about 100 °C, its glass transition temperature. It is also copolymerized, or blended with other polymers, lending hardness and rigidity to a number of important plastic and rubber products. It becomes rigid again when cooled. At room temperature, PS is normally a solid thermoplastic but can be melted at a higher temperature for molding or extrusion, then resolidified. This temperature behavior is exploited for extrusion (as in Styrofoam) and also for molding and vacuum forming since it can be cast into molds with fine detail.

Under ASTM standards, polystyrene is regarded as not biodegradable. It is not biodegradable plastic and resistant to photolysis. It is a major contributor to the debris in the ocean. It is accumulating as a form of litter in the outside environment, particularly along shores and waterways, especially in its foam form, and in the Pacific Ocean. Although recyclable, polystyrene is not recycled in many parts of the world.

Polystyrene is an inexpensive and hard plastic, and probably only polyethylene is more common in your everyday life.