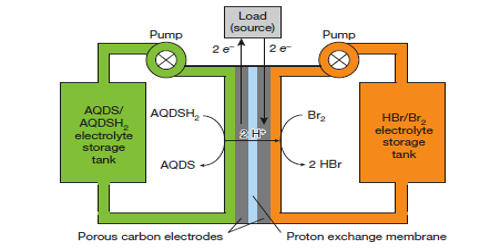 Energy storage technologies are of great importance to balance the supply and demand of electricity generation, distribution, and usage. The polysulfide bromide battery is a type of regenerative fuel cell involving a reversible electrochemical reaction between two salt-solution electrolytes: sodium bromide and sodium polysulfide. It is an example and type of redox (reduction-oxidation) flow battery. Redox‐flow batteries have attracted extensive attention because of their flexibility and scalability and are promising large‐scale energy storage systems for electrical grids. As an emerging member of the redox‐flow battery family, polysulfide flow batteries exhibit a relatively high energy density with the ultralow chemical cost of the redox-active materials.

Flow battery (FB) technologies empower large-scale energy storage (ES) systems that have the potential to transform an electrical generation, transmission and distribution network operations, and planning, as well as distributed power generation and facility load management. In 2002, a 12 MWe prototype electrical storage facility was built at Little Barford Power Station in the UK, which uses polysulfide bromide flow batteries. Although the facility was completed, due to engineering issues in scaling up the technology, it was never fully commissioned. In general, battery energy storage technologies are expected to meet the requirements of GLEES such as peak shaving and load leveling, voltage and frequency regulation, and emergency response, which are highlighted in this perspective.

Two different salt solution electrolytes are contained in two separate tanks. When energy is required, a solution of Na2S2 (sodium disulfide) is pumped to the anode, and NaBr3 (sodium tribromide) is pumped to the cathode. The anode and cathode, and their corresponding salt solutions, are separated by an ion-exchange membrane. At the negative electrode, the anodic reaction is shown as:

At the positive electrode, the cathodic reaction is shown as:

As energy is drawn from the system, the sodium disulfide becomes sodium polysulfide, and the sodium tribromide becomes sodium bromide. The special solution chemistry and complex conversions between sulfur and polysulfides with long and short chains lead to various system design schemes and complicated reaction mechanisms. This reaction can be reversed when a current is supplied to the electrodes, and the system chemical salts are recharged. The system is defined as a fuel cell because the electrodes are not consumed by the reaction, they act only as a surface for the reaction. Moreover, a high energy density can be expected with highly concentrated electrolytes, guaranteeing a promising sustainable energy storage technology candidate for both stationary and mobile applications. For stationary application, grid-level large-scale electrical energy storage (GLEES) is an electricity transformation process that converts the energy from a grid-scale power network into a storable form that can be converted back to electrical energy once needed.