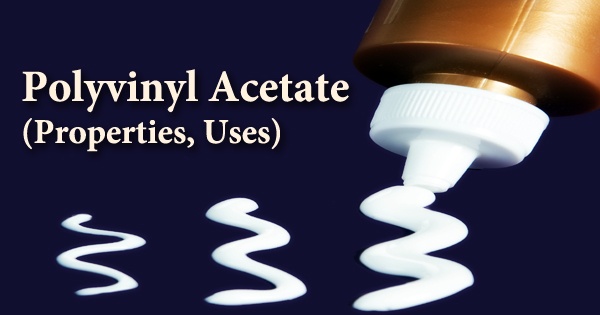 In the United States, polyvinyl acetate (PVA, PVAc, poly(ethenyl ethanoate)) is a synthetic resin made by polymerizing vinyl acetate. It is often known as wood glue, white glue, carpenter’s glue, school glue, or Elmer’s glue. It is a common adhesive for porous materials such as wood, paper, and fabric. Polyvinyl acetate is most often employed as a film-forming component in water-based (latex) paints, although it is also utilized in adhesives. It is a rubbery aliphatic synthetic polymer with the formula (C4H6O2)n that belongs to the polyvinyl ester family and has the general formula (RCOOCHCH2). It’s a thermoplastic material.

Ethylene is converted to vinyl acetate (CH2 = CHO2CCH3) using a palladium catalyst in a reaction with oxygen and acetic acid. Polyvinyl acetate has a glass transition temperature of 30 to 45 °C, depending on the molecular weight. Vinyl acetate monomers (single-unit molecules) may be connected into long, branching polymers (big, multiple-unit molecules) by free-radical initiators. PVAc dispersions, like Elmer’s Glue-All, contain polyvinyl alcohol as a protective colloid. Boron chemicals like boric acid or borax induce the polyvinyl alcohol to cross-link under alkaline conditions, resulting in tackifying precipitates or toys like Slime and Flubber.

The ester groups of polyvinyl acetate are susceptible to base hydrolysis, converting PVAc to polyvinyl alcohol and acetic acid over time. Polyvinyl acetate may be degraded by a variety of bacteria. Filamentous fungus are the most prevalent source of degradation, but algae, yeasts, lichens, and bacteria can all degrade polyvinyl acetate. Boron chemicals like boric acid or borax induce the polymer to cross-link under alkaline conditions, resulting in tackifying precipitates or slime.

Typically, just a portion of the monomer and catalyst are charged at the start of the reaction; the rest is added afterward. PVAc formulations are used as adhesives for porous materials, notably wood, paper, and cloth, and as a consolidant for porous construction stone, particularly sandstone, as a dispersion in water. Polyvinyl acetate (PVA) is a leathery, colorless thermoplastic polymer that softens at low temperatures and is light and oxygen resistant. The polymers are noncrystalline and transparent.

Polyvinyl acetate is primarily used as adhesives and binders in water-based and emulsion paints. Due to its flexible strong bond and non-acidic nature, it is used in bookbinding and book arts (unlike many other polymers). The use of PVAC on the Archimedes Palimpsest in the twentieth century made it much more difficult to disbind the book and preserve and image the pages in the early twenty-first century, partly because the adhesive was stronger than the parchment it held together.

The stiff homopolymer PVAc, but mostly the more soft copolymer vinyl acetate-ethylene (VAE), a mixture of vinyl acetate and ethylene, is used in paper coatings, paint, and other industrial coatings, as a binder in nonwovens, sanitary napkins, filter paper, and textile finishing. PVAc may also be used to coat cheese to protect it from fungus and moisture. To make polyvinyl alcohol, polyvinyl acetate is partially or totally hydrolyzed.