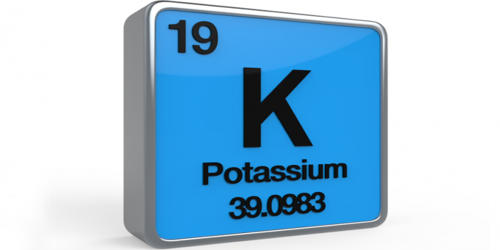 Potassium in nature occurs only in ionic salts. Most potassium occurs in the Earth’s crust as minerals, such as feldspars and clays. It is found dissolved in seawater and occurs in many minerals such as orthoclase, a common constituent of granites and other igneous rocks. It was the first metal to be isolated by electrolysis, by the English chemist Sir Humphry Davy, when he obtained the element (1807) by decomposing molten potassium hydroxide (KOH) with a voltaic battery. Classified as an alkali metal, potassium is a solid at room temperature. Physically and chemically it resembles the other alkali metals in Group 1 of the periodic table. It is extremely reactive, more so than sodium.

Potassium is a soft, silvery-white metal with a melting point of 63°C (145°F) and a boiling point of 770°C (1,420°F). Its density is 0.862 grams per cubic centimeter, less than that of water (1.00 grams per cubic centimeter). It is chemically very similar to sodium, the previous element in group 1 of the periodic table. It reacts readily with all acids and with all non-metals, such as sulfur, chlorine, fluorine, phosphorus, and nitrogen. They have similar first ionization energy, which allows for each atom to give up its sole outer electron. It was suspected in 1702 that they were distinct elements that combine with the same anions to make similar salts and was proven in 1807 using electrolysis. Naturally occurring potassium is composed of three isotopes, of which 40K is radioactive. Traces of 40K are found in all potassium, and it is the most common radioisotope in the human body.

Potassium metal is soft and white with a silvery luster, has a low melting point, and is a good conductor of heat and electricity.  Most industrial applications of potassium exploit the high solubility in water of potassium compounds, such as potassium soaps. The greatest demand for potassium compounds is in fertilizers. Many other potassium salts are of great importance, including nitrate, carbonate, chloride, bromide, cyanide, and sulfate. Heavy crop production rapidly depletes the soil of potassium, and this can be remedied with agricultural fertilizers containing potassium, accounting for 95% of global potassium chemical production. Potassium carbonate is used in the manufacture of glass. Potassium hydroxide is used to make detergent and liquid soap.