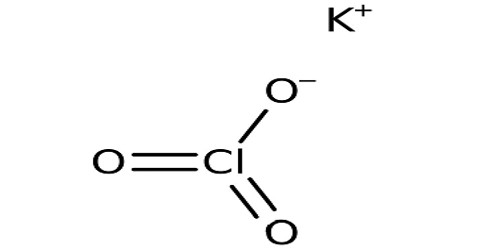 It is a colorless crystalline solid. The aqueous solution of potassium chlorate is a colorless liquid that is denser than water. It dissolves in water. It forms a very flammable mixture with combustible materials. It is a strong oxidizing agent. It gives off oxygen when heated. Sometimes manganese(IV) oxide is used to make the oxygen come faster. The mixture may be explosive if combustible material is very finely divided. It can explode when mixed with a strong reducing agent. It can make many things burn that don’t normally burn. It could be toxic when ingested. It has a cooling and saline taste.

It is made by electrolysis of a hot solution of potassium chloride. This is similar to the chloralkali process. It can also be made by reacting concentrated sodium chlorate with potassium chloride. On the industrial scale, it can be produced via the Liebig process:

It is the most common chlorate in industrial use. It is used in fireworks. It is a part of Armstrong’s mixture, a sensitive explosive. It is also used to make oxygen gas in high school and college labs. It can burn sugar when mixed with sugar and concentrated sulfuric acid. It can also replace potassium nitrate in gunpowder. It is used in oxygen candles. Oxygen candles made oxygen when burned.

Potassium chlorate should be handled with care. It is a strong oxidizing agent and can catch many things on fire. When it is mixed with sulfur or phosphorus, it burns very easily. Contact may irritate skin, eyes and mucous membranes. Many other chemicals can make dangerous mixtures with potassium chlorate.