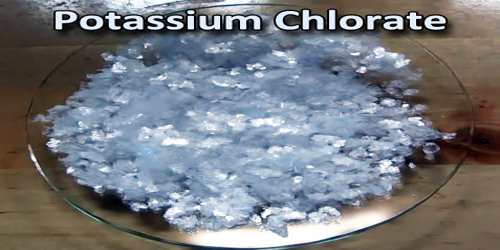 Potassium chlorate is a white crystalline solid, which is forms a very flammable mixture with combustible materials. It is a compound containing potassium, chlorine and oxygen atoms, with the molecular formula KClO3. Mixture may be explosive if combustible material is very finely divided. Mixture may be ignited by friction. Contact with strong sulfuric acid may cause fires or explosions. May spontaneously decompose and ignite when mixed with ammonium salts. May explode under prolonged exposure to heat or fire. Used to make matches, paper, explosives, and many other uses.

Potassium chlorate should be handled with care. It reacts vigorously, and in some cases spontaneously ignites or explodes, when mixed with many combustible materials.

Production and uses of Potassium Chlorate

Potassium Chloride, the stating material for the production of Potassium chlorate, is made into a saturated solution with water. The solution is treated for the precipitation of calcium and magnesium impurities. The additions of potassium dichromate to the extent of 3 gm/1 to the purified potassium chloride solution complete the make up of cell feed. Potassium chlorate can be produced in small amounts by disproportionation in a sodium hypochlorite solution followed by metathesis reaction with potassium chloride:

It can also be produced by passing chlorine gas into a hot solution of caustic potash:

Potassium chlorate is often used in high school and college laboratories to generate oxygen gas. It is a far cheaper source than a pressurized or cryogenic oxygen tank. Potassium chlorate readily decomposes if heated while in contact with a catalyst, typically manganese (IV) dioxide (MnO2). It is also used in chemical oxygen generators, which is also called chlorate candles or oxygen candles, employed as oxygen-supply systems of e.g. aircraft, space stations, and submarines, and have been responsible for at least one plane crash.