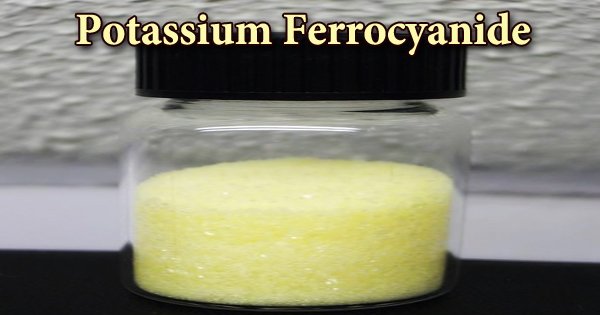 The inorganic compound potassium ferrocyanide, also known as yellow prussiate of potash, has the formula K4(Fe(CN)6)3H2O. It’s a saline-tasting yellow crystal that’s soluble in water, insoluble in alcohol, and loses water at 60°C. It’s used in medicine, dry paints, explosives, and as an analytical reagent, among other things. The coordination complex (Fe(CN)6)4- has a potassium salt. It was made by stirring hot potassium carbonate with an iron rod with wool or horn clippings.

Pierre Joseph Macquer (1718–1784), a French chemist, was the first to mention the preparation of potassium ferrocyanide, which he accomplished by reacting Prussian blue (iron(III) ferrocyanide) with potassium carbonate in 1752. Potassium ferrocyanide was used as a developer and an intermediate for alkaline pyro developers in some iron processes. Dry paints, tempering steel, dyeing, explosives, process engraving and lithography, laboratory reagents, potassium cyanide and ferricyanide.

When heated to red flame, potassium ferrocyanide releases extremely poisonous gases, but the compound itself is not toxic. It is not poisonous to humans because it does not decompose in the body to cyanide. When combined with strong acids, however, this compound can be fatal. H2Fe(NO)(CN)5 is formed when potassium ferrocyanide is treated with nitric acid. Red sodium nitroprusside crystals can be selectively crystallized after neutralization of this intermediate with sodium carbonate.

In addition to steel tempering, potassium ferrocyanide is used in process engraving. It’s also suitable for animal feed. Potassium ferrocyanide is used in the lab to assess the concentration of potassium permanganate, a compound widely used in redox titrations. Most metal compounds that are insoluble in water form ferro cyanogen, which has highly distinctive colors and can be used to test for cupric and ferric compounds.