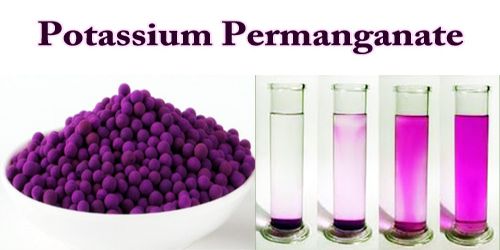 Potassium permanganate is more properly known as potassium magnate VII, and is an inorganic compound with the chemical formula KMnO4 and composed of K+ and MnO−4. Potassium permanganate appears as a purplish colored crystalline solid that dissolves in water to give intensely pink or purple solutions. Noncombustible but accelerates the burning of combustible material.

Potassium Permanganate first to have been produced as far back as 1659 by the German chemist Johann Rudolf Glauber, now best remembered for ‘Glauber’s salt’ sodium sulfate which he also discovered. Potassium permanganate is widely used in the chemical industry and laboratories as a strong oxidizing agent, and also as a medication for dermatitis, for cleaning wounds, and general disinfection.

Potassium Permanganate is soluble in many organic solvents; also by concentrated acids with the liberation of oxygen. It is on the WHO (World Health Organization) Model List of Essential Medicines, the safest and most effective medicines needed in a health system. In 2000, worldwide production was estimated at 30,000 tonnes. Potassium permanganate’s value has been as an oxidizing agent a compound that reacts easily to add oxygen to another substance.

Potassium permanganate is used for a number of skin conditions; this includes fungal infections of the foot, impetigo, pemphigus, superficial wounds, dermatitis, and tropical ulcers. Because the reaction produced by potassium permanganate doesn’t have toxic end products, it has been used both in conventional water treatment, where it removes taste and odor contaminants, and to clear swimming pool water. It is also used as a regeneration chemical to remove iron and hydrogen sulfide (rotten egg smell) from well water via a “Manganese Greensand” Filter.

Despite its tendency to discolor glassware, potassium permanganate also has a role to play in analytical chemistry, where its oxidizing capabilities and strong coloration make it a good reagent for detecting the quantity of oxidizable organic material present, often matching it in titration against a standard reducing agent like oxalic acid. A major application of KMnO4 (Potassium permanganate) is as a reagent for the synthesis of organic compounds. Significant amounts are required for the synthesis of ascorbic acid, chloramphenicol, saccharin, isonicotinic acid, and pyrazinoic acid.

Potassium permanganate is stable in the air; decomposes at approx 240 °C with the evolution of oxygen; with hydrochloric acid, chlorine is liberated; readily decomposed by many reducing substances, such as ferrous salts, iodides, oxalates, etc., especially in the presence of an acid. It can be used to quantitatively determine the total oxidizable organic material in an aqueous sample. The value determined is known as the permanganate value.

Potassium permanganate formed a pretty purple colored liquid in solution, but with an addition from the food cupboard, the crystals came into their own. When dry potassium permanganate is heated to 200-300 °C, an exothermic, autocatalytic decomposition takes place with the evolution of oxygen; Contact with fuels can lead to spontaneous ignition and potentially violent combustion, particularly water-soluble organic substances (such as polyhydroxyl compounds). Potassium permanganate was used as a bleaching agent in histology.