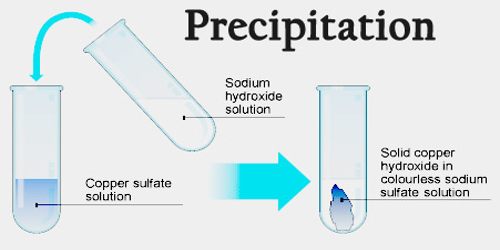 Precipitation is a process that causes dissolved substances to separate from a solution as a solid. In general, precipitation happens when one phase is ejected from another – a liquid ejects a solid, or a gas ejects a liquid or solid. When the reaction occurs in a liquid solution, the solid formed is called the ‘precipitate’. Precipitation may occur if the concentration of a compound exceeds its solubility, such as when mixing solvents or changing their temperature. Precipitation may occur rapidly from a supersaturated solution. The precipitation reaction is defined as the “Chemical reaction occurring in aqueous solutions where two ionic bonds combine forming up insoluble salts.” The salts formed are precipitates and are the products of precipitation reaction. It is the double displacement reactions involving the production of a solid form residue called the precipitate. The reaction also occurs when two or more solutions with different salts are combined, resulting in the formation of insoluble salts that precipitates out of the solution.

Chemical precipitation, formation of a separable solid substance from a solution, either by converting the substance into an insoluble form or by changing the composition of the solvent to diminish the solubility of the substance in it. The distinction between precipitation and crystallization lies largely in whether emphasis is placed on the process by which the solubility is reduced or on that by which the structure of the solid substance becomes organized.

Precipitate formation is useful in the detection of the type of cation in a salt. To do this, an alkali first reacts with the unknown salt to produce a precipitate that is the hydroxide of the unknown salt. To identify the cation, the color of the precipitate and its solubility in excess are noted. Similar processes are often used in sequence – for example, a barium nitrate solution will react with sulfate ions to form a solid barium sulfate precipitate, indicating that it is likely that sulfate ions are present. Precipitation often is used to remove metal ions from aqueous solutions: silver ions present in a solution of a soluble salt, such as silver nitrate, are precipitated by addition of chloride ions, provided, for example, by a solution of sodium chloride; the chloride ions and the silver ions combine to form silver chloride, a compound that is not soluble in water. Similarly, barium ions are precipitated by sulfate ions, and calcium by oxalate; schemes have been developed for analysis of mixtures of metal ions by successive application of reagents that precipitate specific ions or groups of related ions.

Precipitation reaction helps in determining a particular element present in the given solution. These reactions also monitor the formation of a precipitate when some chemical is added to solutions. These are used for the extraction of magnesium from the seawater. The human body also encounters these reactions existing between antigens and antibodies.