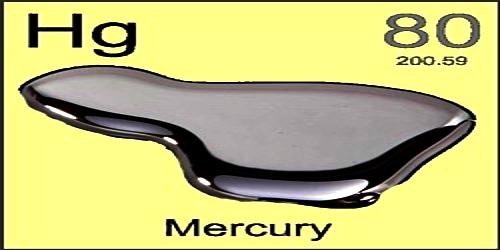 Mercury (chemical symbol Hg) is an amazing element. It is one of the few metals which is liquid at room temperature. It is extremely volatile, meaning it can easily be converted into gaseous form. Because of its unique properties, mercury is used in many different applications including devices such as thermometers, thermostats, fluorescent lights, and switches. It is also used in paints, preservatives, and some pesticides.

Mercury is the only common metal which is liquid at ordinary temperatures. It can be used to make thermometers, barometers and other scientific instruments. It is also a very good conductor of electricity. Mercury that is released into the environment will remain there indefinitely. Because of its high density it is used in barometers and manometers. The form that mercury exists in (organic or inorganic) may change with time. Some or all of released organic mercury will slowly decompose to become inorganic mercury. Some portion of released inorganic mercury will be slowly transformed into organic mercury by bacteria in soil or water.

Mercury is not flammable and does not have an odor. Some mercury salts and organic compounds are soluble in water, depending on the chemical species. It is moderately active. It does not react with oxygen in the air very readily. It reacts with some acids when they are hot, but not with most cold acids. Reaction of mercury with air

Mercury metal reacts in air at about 350°C to form mercury(II) oxide.

Reaction of mercury with water

Mercury does not react with water under normal conditions.

Reaction of mercury with the halogens

Reaction of mercury with acids

Mercury does not react with non-oxidizing acids but does react with concentrated nitric acid, HNO3, or concentrated sulphuric acid, H2SO4, to form mercury(II) compounds together with nitrogen or sulphur oxides.

Reaction of mercury with bases

Mercury does not react with alkalis under normal conditions