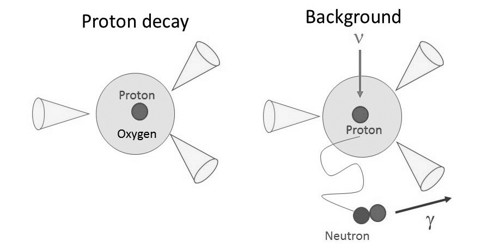 Proton decay is a theory where some physicists believe that radioactive decay could also be that a proton decays into two particles smaller than an atom, a pion, and a positron. Proton decay is a rare type of radioactive decay of nuclei containing excess protons, in which a proton is simply ejected from the nucleus. So far, this has not been observed though. No one has observed any evidence for proton decay. Most current theories say that protons do not decay. The problem is that if protons don’t decay at all, then we don’t know how to create a matter-imbalance difference in the early universe. The proton decay hypothesis was first formulated by Andrei Sakharov in 1967.

That might be disappointing professionally for physicists, but it’s good news for the universe. If it turns out to be possible, proton decay could be the beginning of the end of everything. Because protons are composed of three quarks this transformation would allow them to decay, something that is not predicted by the Standard Model. According to the Standard Model, protons, a type of baryon, are stable because the baryon number (quark number) is conserved. Observation of proton decay would be indirect evidence for these heavy particles and new physics beyond the Standard Model. Because the exchanged particle is so heavy, the proton lifetime predicted by grand unification models is extremely long… about 20 orders of magnitude longer than the age of the universe! From a theory point of view, most theorists consider it essential that the proton decay, although the decay rate may be very, very small.