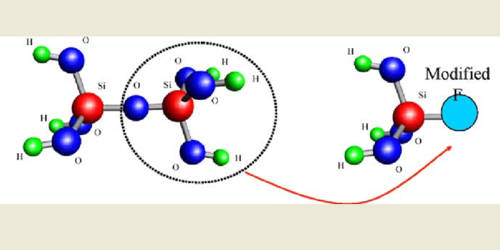 A pseudo acid in organic chemistry is a cyclic oxocarboxylic acid. Most commonly, these form from aldehyde and keto carboxylic acids and the cyclic forms are furanoid (5-ring with oxygen) or pyranoid (6-ring with oxygen). It is a compound believed not to contain acid hydrogen but to be capable of changing into an isomeric compound which is a true acid. The original pseudo acid to be described as such (using the German pseudosauren) was levulinic acid (4-oxopentanoic acid). It is an organic compound which, in the free state, has not the structure of an acid: in the presence of bases, it gradually undergoes molecular rearrangement and forms salts.

Unlike the parent (open-form) oxocarboxylic acid, the pseudo acid has a chiral center. It is a compound which is not itself an acid but which exists in equilibrium with, or is easily converted into, an acidic form and thus undergoes some typical reactions of acids.

The position of equilibrium in oxocarboxylic acids, toward the open form or the cyclic (pseuodacid) form, is influenced by a number of factors. In aliphatic 4- and 5-oxocarboxylic acids, intervening substituents assists in ring closure. Alkenes with the interacting groups substituted cis to each other also assists in ring closure. Aryl systems with the interacting groups substituted ortho to each other assists in ring closure. Other factors such as the gem-dialkyl effect (Thorpe–Ingold effect), electronic influences, and steric compression can also influence the open-cyclic equilibrium. Pseudopeptides are among a variety of terms that can be used to describe backbone-modified peptides.

Like carboxylic acids, pseudocide has “pseudoacyl” derivatives. These include pseudoacyl halides, pseudoesters, endocyclic and exocyclic-N pseudoamides, and pseudoanhydrides. Like aldehydes and ketones, Pseudacris have “pseudocarbonyl” derivatives also. Hydrolysis of ester in acidic medium is pseudo unimolecular and in alkaline medium is bimolecular.