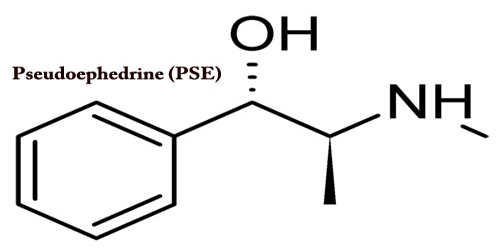 The term, “Pseudoephedrine” (PSE) is a sympathomimetic phenethylamine and an ephedrine diastereomer. This can be used as a decongestant to the nasal/sinus, as a stimulant, or in higher doses as a wakefulness-promoting agent. Pseudoephedrine displaces norepinephrine in presynaptic neurons from storage vesicles, thereby releasing norepinephrine into the neuronal synapses where it mainly activates alpha-adrenergic receptors.

Pseudoephedrine (PSE) was first characterized in 1889, by the German chemists Ladenburg and Oelschlägel, who used a sample that had been isolated from Ephedra Vulgaris by the Merck pharmaceutical corporation of Darmstadt, Germany. It’s a member of the category of phenylethanolamines that’s (1S)-2-(methylamino)-1-phenylethan-1-ol within which the pro-S hydrogen at position 2 is replaced by an alkyl radical. Its principal mechanism of action depends on its effects on the adrenergic receptor system, causing vasoconstriction. It also has weak direct agonist activity at alpha- and beta-adrenergic receptors. Receptor stimulation leads to vasoconstriction and reduces nasal and sinus congestion.

Pseudoephedrine has a function as a sympathomimetic agent, an anti-asthmatic medication, a bronchodilator, a vasoconstrictor, a central nervous system medication, a nasal decongestant, a xenobiotic and a metabolite of plants. Pseudoephedrine hydrochloride and its sulfate salts are found in an abundance of over-the-counter medications, either as one ingredient or together with other ingredients, like anti-histamines, acetaminophen, guaifenesin, anti-inflammatory drug drugs, and dextromethorphan.

For conditions like nasal congestion, sinus congestion, and eustachian tube congestion, the most common indication for pseudoephedrine is as a decongestant, as it shrinks swollen nasal mucous membranes and decreases tissue hyperemia and oedema. Other beneficial effects may include increasing the drainage of sinus secretions, and opening of obstructed Eustachian tubes. The identical vasoconstriction action also can end in hypertension, which could be a noted side effect of pseudoephedrine.

Of optimal outcomes in allergic rhinitis, croup, acute and subacute sinusitis, acute otitis medica, and acute tracheobronchitis, pseudoephedrine can also be suggested as an alternative to analgesics, antihistamines, antibiotics, antitussive, or expectorants. It is often used either as oral or as a topical decongestant. Although pseudoephedrine has been employed in the symptomatic treatment of respiratory illness and reversible bronchospasm, the drug appears to be ineffective as a bronchodilator. Consistent with one study, pseudoephedrine may show effectiveness as an antitussive drug (suppression of cough).

Pseudoephedrine may cause mild CNS stimulation, especially in patients who are hypersensitive to the results of sympathomimetic drugs. Its principal mechanism of action relies on its objection on the adrenergic receptor system. The vasoconstriction that pseudoephedrine produces is believed to be principally an α-adrenergic receptor response. Many of the adverse effects of pseudoephedrine that usually require no medical treatment and can subside during use include nervousness, restlessness, and sleeping disorders. Dysuria, syncopia, tachycardia, palpitations, headache, nausea and vomiting, tremor, and weakness are less common. Research also found that pseudophedrine in breastfeeding women is capable of reducing milk production.