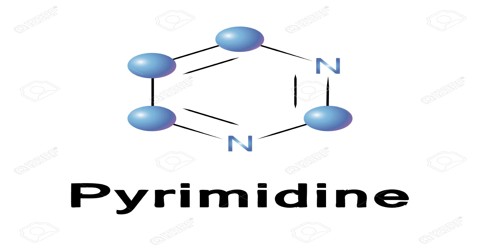 Pyrimidine is a liquid or crystalline organic compound with a penetrating odour; 1, 3-diazine. It is a weakly basic soluble heterocyclic compound and can be prepared from barbituric acid. In nucleic acids, three types of nucleobases are pyrimidine derivatives: cytosine (C), thymine (T), and uracil (U). Pyrimidines are one of two biologically important families of nitrogen-containing molecules called nitrogenous bases. Purines are the other family of nitrogenous bases. Pyrimidines can be identified by their structure: six atoms in the shape of a ring. This ring is known as a pyrimidine ring. The pyrimidine ring is a heterocyclic compound, which means it contains atoms from at least two different elements. A homocyclic compound, on the other hand, contains atoms from only one element.

The pyrimidine ring system has wide occurrence in nature as substituted and ring fused compounds and derivatives, including the nucleotides, thiamine (vitamin B1) and alloxan. It is also found in many synthetic compounds such as barbiturates and the HIV drug, zidovudine. The nomenclature of pyrimidines is straightforward. However, like other heterocyclics, tautomeric hydroxyl groups yield complications since they exist primarily in the cyclic amide form.

Structure and Function of Pyrimidine The most important function of pyrimidines is in the construction of deoxyribonucleic acid, or DNA and ribonucleic acid, RNA. This genetic material, which guides your cells’ day-to-day functions and assures the reproduction of every living thing on earth, would not exist without pyrimidines. When paired with purines, pyrimidines serve as the building blocks for DNA, which is the basis for your genes and chromosomes.

Three pyrimidine bases, thymine, cytosine, and uracil, and two purine bases, adenine and guanine, are all that are needed to produce the staggering diversity observed in the many species on our planet. Matching one pyrimidine base with one purine base forms a base pair. These base pairs join with one another to form long, double-stranded chains of DNA. The DNA chains coil to form chromosomes. Even though each base pair in DNA always consists of one pyrimidine base and one purine base, the rearrangement of these base pairs results in different DNA sequences. The differences in a DNA sequence make each species in nature unique.

Chemical and Physical Properties of Pyrimidine Electron lone pair availability (basicity) is decreased compared to pyridine. Compared to pyridine, N-alkylation and N-oxidation are more difficult. The pKa value for protonated pyrimidine is 1.23 compared to 5.30 for pyridine. Protonation and other electrophilic additions will occur at only one nitrogen due to further deactivation by the second nitrogen. The 2-, 4-, and 6- positions on the pyrimidine ring are electron deficient analogous to those in pyridine and nitro- and dinitrobenzene. The 5-position is less electron deficient and substitutents there are quite stable. However, electrophilic substitution is relatively facile at the 5-position, including nitration and halogenation.

Reduction in resonance stabilization of pyrimidines may lead to addition and ring cleavage reactions rather than substitutions. One such manifestation is observed in the Dimroth rearrangement.

Physical properties are shown in the data box. A more extensive discussion, including spectra, can be found in Brown et al. Because of the decreased basicity compared to pyridine, electrophilic substitution of pyrimidine is less facile. Protonation or alkylation typically takes place at only one of the ring nitrogen atoms. Mono-N-oxidation occurs by reaction with peracids.

Nucleophilic C-substitution should be facilitated at the 2-, 4-, and 6-positions but there are only a few examples. Amination and hydroxylation has been observed for substituted pyrimidines. Reactions with Grignard or alkyllithium reagents yield 4-alkyl- or 4-aryl pyrimidine after aromatization.