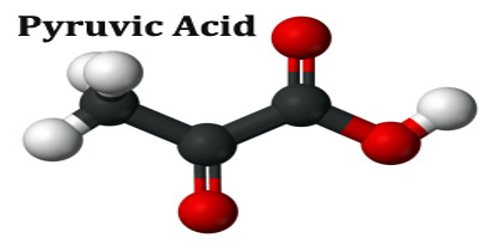 Pyruvic acid is a colorless organic liquid formed by the breakdown of carbohydrates and sugars during cell metabolism. Its Chemical formula: C3H4O3. It is the final product of glycolysis and is converted into acetyl coenzyme A, which is required for the Krebs cycle. It is also used in the body to synthesize the amino acid alanine. Pyruvic acid can be made from glucose through glycolysis, converted back to carbohydrates (such as glucose) via gluconeogenesis, or to fatty acids through a reaction with acetyl-CoA. It can also be used to construct the amino acid alanine and can be converted into ethanol or lactic acid via fermentation.

It is an intermediate compound in the metabolism of carbohydrates, proteins, and fats. In thiamine deficiency, its oxidation is retarded and it accumulates in the tissues, especially in nervous structures. Biological Source: Intermediate in primary metabolism including fermentation processes. Present in muscle in redox equilibrium with Lactic acid. A common constituent, as a chiral cyclic acetal linked to saccharide residues, of bacterial polysaccharides. Isolated from cane sugar fermentation broth and peppermint.

Pyruvic acid reacts with N-acetyl mannosamine by an aldol-type condensation to form sialic acid. Pyruvic acid is a component of commercial red seaweed polysaccharide. In muscle, pyruvic acid (derived from glycogen) is reduced to lactic acid during exertion, which is reoxidized and partially retransformed to glycogen during rest. Pyruvic acid is a colorless liquid with a smell similar to that of acetic acid and is miscible with water. In the laboratory, pyruvic acid may be prepared by heating a mixture of tartaric acid and potassium hydrogen sulfate, by the oxidation of propylene glycol by a strong oxidizer (e.g., potassium permanganate or bleach), or by the hydrolysis of acetyl cyanide, formed by reaction of acetyl chloride with potassium cyanide:

Pyruvic acid was used to study the cultivation of previously undescribed soil bacteria as micro colonies using soil substrate membrane system. Pyruvic acid was used to develop a new method for simultaneous determination of organic acids in red wine and must using liquid chromatography. Pyruvate is an important chemical compound in biochemistry. It is the output of the metabolism of glucose known as glycolysis. One molecule of glucose breaks down into two molecules of pyruvate, which are then used to provide further energy, in one of two ways.