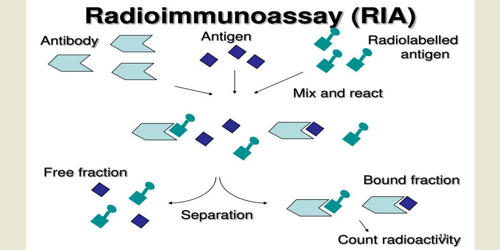 Radioimmunoassay (RIA) is an in vitro assay that measures the presence of an antigen with very high sensitivity. It is an immunoassay that uses radiolabeled molecules in a stepwise formation of immune complexes. It is a technique for determining antibody levels by introducing an antigen labeled with a radioisotope and measuring the subsequent radioactivity of the antibody component. An RIA is a very sensitive in vitro assay technique used to measure concentrations of substances, usually measuring antigen concentrations (for example, hormone levels in the blood) by use of antibodies. Basically any biological substance for which a specific antibody exists can be measured, even in minute concentrations.

Although the RIA technique is extremely sensitive and extremely specific, requiring specialized equipment, it remains among the least expensive methods to perform such measurements. It requires special precautions and licensing since radioactive substances are used.

In contrast, an immunoradiometric assay (IRMA) is an immunoassay that uses radiolabeled molecules but in an immediate rather than stepwise way. A radioallergosorbent test (RAST) is an example of radioimmunoassay. It is used to detect the causative allergen for an allergy. RIA was first described in 1960 for the measurement of endogenous plasma insulin by Solomon Berson and Rosalyn Yalow of the Veterans Administration Hospital in New York.

The target antigen is labeled radioactively and bound to its specific antibodies. Classically, to perform a radioimmunoassay, a known quantity of an antigen is made radioactive, frequently by labeling it with gamma-radioactive isotopes of iodine, such as 125-I, attached to tyrosine. The competition for the antibodies will release a certain amount of labeled antigen. This radiolabeled antigen is then mixed with a known amount of antibody for that antigen, and as a result, the two specifically bind to one another. The object is to measure the amount of an antigen present in a sample containing an antibody. Then, a sample of serum from a patient containing an unknown quantity of that same antigen is added. This amount is proportional to the ratio of labeled to an unlabeled antigen. This causes the unlabeled (or “cold”) antigen from the serum to compete with the radiolabeled antigen (“hot”) for antibody binding sites. That means that as the concentration of the unlabeled antigen is increased, more of it binds to the antibody, displacing the labeled variant.

It involves a combination of three principles.

Radioimmunoassay is an old assay technique but it is still a widely used assay and continues to offer distinct advantages in terms of simplicity and sensitivity. This method can be used for any biological molecule in principle and is not restricted to serum antigens, nor is it required to use the indirect method of measuring the free antigen instead of directly measuring the captured antigen. The RIA would begin with the “cold” unlabeled antibody being allowed to interact and bind to the target molecule in solution. Preferably, this unlabeled antibody is immobilized in some way, such as coupled to an agarose bead, coated to a surface, etc.