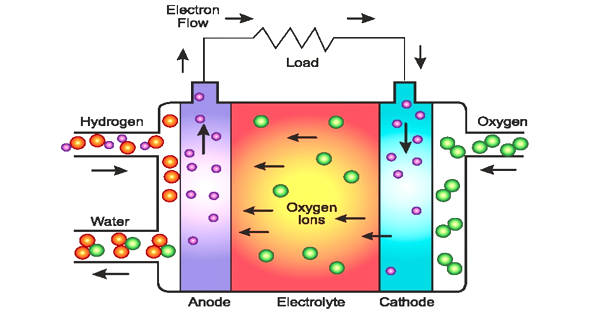 A fuel cell generates electricity cleanly and efficiently by utilizing the chemical energy of hydrogen or other fuels. When hydrogen is used as a fuel, the only byproducts are electricity, water, and heat. Researchers demonstrate a successive proton transport mechanism in a material that could be used to generate reliable primary and backup power in the future.

Fuel cells have been commercialized as a versatile source of power since the 1930s. Now, Japanese researchers have highlighted the impressive chemistry of a key component of an upcoming fuel cell technology.

Researchers from the University of Tsukuba have discovered successive proton transport (energy transfer) in an advanced carbon-based crystal for future fuel cells, as well as the chemistry that underpins this phenomenon, in a study recently published in The Journal of Physical Chemistry Letters.

Researchers demonstrate successive proton transport mechanisms in a material that may be a future source of reliable primary and backup power.

Such crystals hold great promise as solid electrolytes (energy transfer media) in emerging fuel cell technologies. Solid electrolytes have advantages over other electrolytes, such as high power efficiency and long-term stability. Solid electrolytes based on imidazole are popular research topics. Researchers believe that imidazolium hydrogen succinate crystals can exhibit successive proton transport, also known as proton jumping. This has not yet been rigorously confirmed, which is something the researchers at the University of Tsukuba hoped to address.

Professor Yuta Hori, the study’s lead and senior author, says, “A wide range of lab work and computer simulations are consistent with unidirectional proton transport in crystals of imidazolium hydrogen succinate.” “Because this hypothesis needs to be tested further, we calculated the molecular energy versus molecular geometry of our crystals and compared our results to experimental data.”

The researchers investigated a chemical structure known as hydrogen bonds by studying known crystal structures. Infrared spectroscopy can be used to characterize the hydrogen dynamics on these bonds, which facilitate proton transport within the crystals.

“The spectroscopy results were clear,” Hori says. “We discovered that at 100°C, as opposed to 30°C, there was a shift to higher energy in a peak related to proton transport.”

Furthermore, the calculated peaks of the researchers – those corresponding to chemical units that strongly contribute to hydrogen bonding – agreed with the experimental data. “We used these findings to build a model that traced how a proton moves from one imidazole unit to another,” says Hori. “The geometric and energetic data provided by our calculated potential energy surface are consistent with proton jumping.”

Fuel cells are now used to power a wide range of civil infrastructure and technologies, and they typically emit very little pollution. Improving the utility of fuel cells in a wider range of applications, aided in part by a better understanding of how they work, will help to reduce wasted power in the coming years.

Fuel cells can be used in a variety of applications, including transportation, industrial/commercial/residential buildings, and long-term energy storage for the grid in reversible systems.

Fuel cells have a number of advantages over traditional combustion-based technologies, which are currently used in many power plants and vehicles. Fuel cells have higher efficiencies than combustion engines and can convert the chemical energy in fuel directly to electrical energy with efficiencies of up to 60%. When compared to combustion engines, fuel cells emit little or no pollution. Because hydrogen fuel cells emit only water, they address critical climate challenges by emitting no carbon dioxide. There are also no air pollutants at the point of operation that causes smog and health problems. Because there are few moving parts in a fuel cell, it operates quietly.