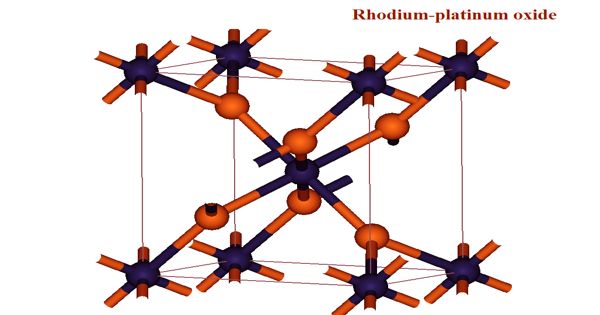 Rhodium Platinum Oxide (or Nishimura’s Catalyst) is a precious metal catalyst used in the hydrogenation of aromatic compounds. Rhodium-platinum oxide (Rh–Pt oxide), is an inorganic compound used as a hydrogenation catalyst. Rhodium alloys find most of their applications in electrical contacts for radio frequency circuits, precision potentiometers, and spark plug electrodes.

Rhodium-platinum oxide is an inorganic compound used as a hydrogenation catalyst. The catalyst can be used to carry out the reaction with minimal losses of oxygen-containing functional groups via hydrogenolysis.

Rh–Pt oxide is used to reduce various aromatic compounds to their respective cycloalkanes or saturated heterocycles under mild conditions (i.e. often at room temperature and atmospheric pressure). In this application, Rh–Pt oxide is superior to other groups 10 catalysts such as platinum dioxide. Furthermore, the catalyst can be used to carry out the reaction with minimal losses of oxygen-containing functional groups via hydrogenolysis.

An aqueous solution of rhodium chloride, chloroplatinic acid, and sodium nitrate is evaporated and then fused in a porcelain dish between 460-480°C until the oxides of nitrogen cease (≈10 minutes). During the manufacture of nitric acid, rhodium-platinum gauzes are used to catalyze the oxidation of ammonia, an operation that results in a major reconstruction of the alloy surface. The resulting solidified mass is then washed with distilled water and dilute sodium nitrate followed by drying with calcium chloride to yield the catalyst. Typically the ratio of metals used for the catalyst is 3:1 Rh/Pt or 7:3 Rh/Pt.

Procedure for the Preparation of Rhodium Platinum Oxide –

A mixture of the chlorides corresponding to 0.30 g. of rhodium and 0.13g of platinum in the weights of the metals is fused with 20 g. of sodium nitrate in the same way as in the preparation of platinum oxides). After a violent evolution of the oxides of nitrogen has almost subsided, the temperature is raised and kept at 460-480C for about 10 min. After cooling, the solidified mass is rinsed in distilled water. The solid is collected, washed with 100ml. of 0.5% aqueous sodium nitrate, and then dried over calcium chloride.

The yield is 0.665 g., which is quantitative on the basis of the metal content (65%) of the oxide. The chemical characterization of the catalyst surface is, however, far less complete. In particular, the necessity for the catalyst to undergo an activation pretreatment process prior to insertion in a commercial plant is not well understood, and no conclusive evidence has been presented as to whether the operational catalyst surface is metallic or oxidic in nature.