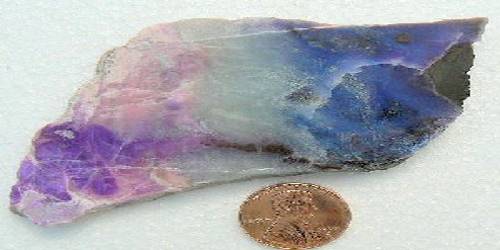 Richterite is a sodium calcium magnesium silicate mineral belonging to the amphibole group. Richterite, [Formula: Na(NaCa)Mg5Si8O22(OH)2] which is sometimes called soda tremolite, is closely related to tremolite. It basically is the sodium-rich version of tremolite which is calcium rich. If iron replaces the magnesium within the structure of the mineral, it is called ferrorichterite; if fluorine replaces the hydroxyl, it is called fluororichterite.

It is not a common mineral but is found worldwide as a small constituent in unusual rocks. Richterite is found in contact metamorphosed limestones, ultramafic igneous extrusives, metasomatic deposits and alkaline igneous rocks. The mineral was named in 1865 for the German mineralogist Hieronymous Theodor Richter (1824–1898). Richterite crystals are long and prismatic, or prismatic to fibrous aggregate, or rock-bound crystals. Colors of richterite range from brown, grayish-brown, yellow, brownish- to rose-red, or pale to dark green.

Richterite often contains some manganese, fluorine and potassium and these are sometimes included in its formula or referred to as a variety such as K-richterite or fluor-magnesio richterite. All these similar sounding variety names and related species make for some confusion.