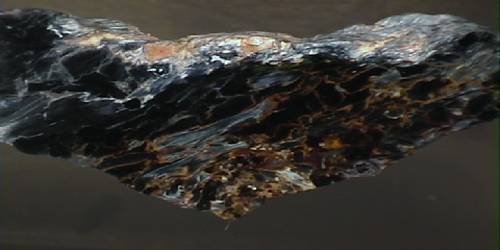 Riebeckite is a sodium-rich member of the amphibole group of silicate minerals, chemical formula Na2(Fe2+3Fe3+2)Si8O22(OH)2. It forms a solid solution series with magnesioriebeckite. It commonly forms prismatic crystals, but it also occurs as a fibrous asbestiform mineral.

It is a moderately hard mineral with a glassy luster. It forms prismatic crystals that are dark blue or black in color. A fibrous variety, crocidolite, is of metamorphic origin and is commonly called blue asbestos. It was first described in 1888 for an occurrence on Socotra Island, Aden Governorate, Yemen and named for German explorer Emil Riebeck (1853–1885). It crystallizes in the monoclinic system, usually, as long prismatic crystals showing a diamond-shaped cross-section, but also in fibrous, bladed, acicular, columnar, and radiating forms. Its Mohs hardness is 5.0–6.0, and its specific gravity is 3.0–3.4. Cleavage is perfect, two directions in the shape of a diamond; fracture is uneven, splintery. It is often translucent to nearly opaque.