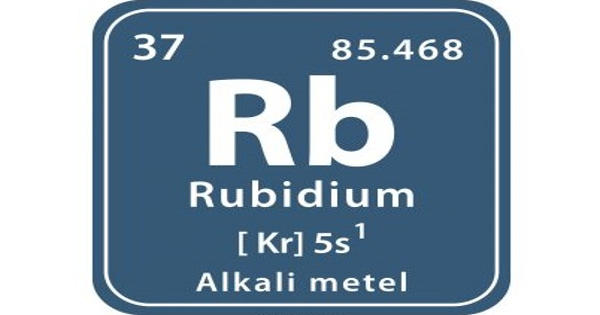 Rubidium is the chemical element with the symbol Rb and atomic number 37. It is the second most reactive metal and is very soft, with a silvery-white luster. Rubidium is a very soft, silvery-white metal in the alkali metal group. Rubidium metal shares similarities to potassium metal and cesium metal in physical appearance, softness, and conductivity. Rubidium cannot be stored under atmospheric oxygen, as a highly exothermic reaction will ensue, sometimes even resulting in the metal catching fire. It was discovered (1861) spectroscopically by German scientists Robert Bunsen and Gustav Kirchhoff and named after the two prominent red lines of its spectrum. 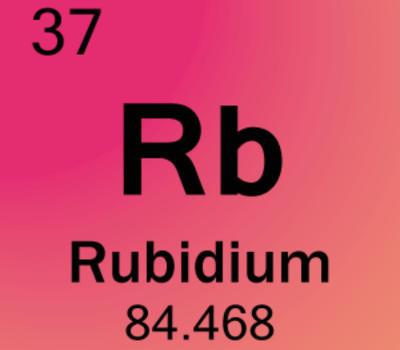 Rubidium is the first alkali metal in the group to have a density higher than water, so it sinks, unlike the metals above it in the group. Rubidium has a standard atomic weight of 85.4678. It has a density about one and a half times that of water and is solid at room temperature, although the metal will melt if it’s just a bit warmer, according to Chemicool. On Earth, natural rubidium comprises two isotopes: 72% is a stable isotope 85Rb, and 28% is slightly radioactive 87Rb, with a half-life of 49 billion years—more than three times as long as the estimated age of the universe.

Rubidium compounds have various chemical and electronic applications.  Rubidium is little-used outside research. It has been used as a component of photocells, to remove traces of oxygen from vacuum tubes and to make special types of glass. Its metal is easily vaporized and has a convenient spectral absorption range, making it a frequent target for laser manipulation of atoms. Its salts are used in glasses and ceramics and in fireworks to give them a purple color. It is not a known nutrient for any living organism. Potential uses are in ion engines for space vehicles, as working fluid in vapor turbines, and as a getter in vacuum tubes. However, rubidium ions have the same charge as potassium ions and are actively taken up and treated by animal cells in similar ways.