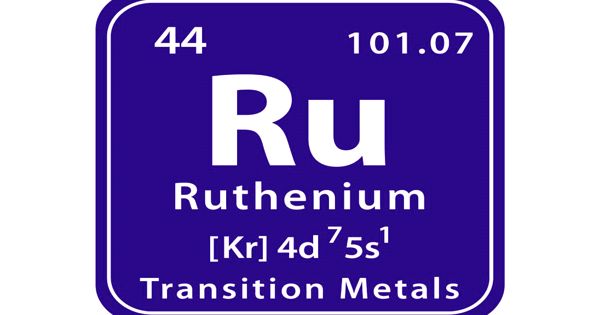 Ruthenium is a rare transition metal belonging to the platinum group of the periodic table. It is used in electrical contact alloys and filaments, in jewelry, in pen nibs, and in instrument pivots. 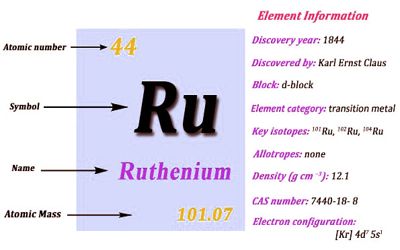 Ruthenium is found free in nature often with the other platinum group metals. As the 74th most abundant element in Earth’s crust, ruthenium is relatively rare, found in about 100 parts per trillion. Ruthenium is usually found as a minor component of platinum ores; the annual production has risen from about 19 tonnes in 2009 to some 35.5 tonnes in 2017.

This element is generally found in ores with the other platinum group metals in the Ural Mountains and in North and South America. Small but commercially important quantities are also found in pentlandite extracted from Sudbury, Ontario, Canada, and in pyroxenite deposits in South Africa.

This makes it one of six least abundant elements on Earth. Most ruthenium produced is used in wear-resistant electrical contacts and thick-film resistors. It is used in electrical contact alloys and filaments, in jewelry, in pen nibs, and in instrument pivots. A minor application for ruthenium is in platinum alloys and as a chemistry catalyst. A new application of ruthenium is as the capping layer for extreme ultraviolet photomasks. It has to be stored safely for at least ten years until the radioactive isotopes have decayed.