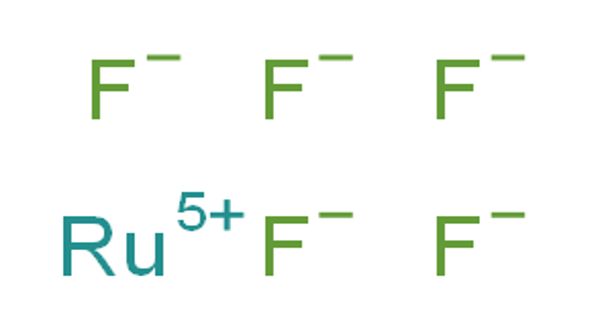 Ruthenium, a transition element, belongs to group VIII (iron) of the periodic classification and to the light platinum metals triad. Ruthenium pentafluoride is the inorganic compound with the empirical formula RuF5. This green volatile solid has rarely been studied but is of interest as a binary fluoride of ruthenium, i.e. a compound containing only Ru and F.

Ruthenium was recognized as a new element by G.W. Osann in 1828. He found it in insoluble residues from aqua regia extract of native platinum from alluvial deposits in the Ural mountains of Russia. He named it Ruthen after the Latin name Ruthenia for Russia. 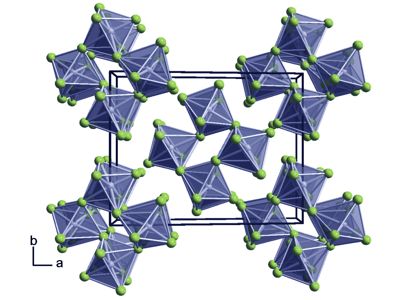 It is sensitive to hydrolysis. Its structure consists of Ru4F20 tetramers, as seen in the isostructural platinum pentafluoride. It occurs in nature natively, found in minor quantities associated with other platinum metals. Its abundance in the earth’s crust is estimated to be 0.001 mg/kg, comparable to that of rhodium and iridium.

Ruthenium is derived from platinum metal ores. The method of production depends on the type of ore. However, the extraction processes are similar to those of other noble metals. Ruthenium, like Rhodium, may be obtained from accumulated anode sludges in electrolytic refining of nickel or copper from certain types of ores. When heated in air at 500 to 700°C, ruthenium converts to its dioxide, RuO2, a black crystalline solid of rutile structure. A trioxide of ruthenium, RuO3, also is known; formed when the metal is heated above 1,000°C. Above 1,100°C the metal loses weight because trioxide partially volatilizes. Ruthenium also forms a tetroxide, RuO4, which, unlike osmium, is not produced by direct union of the elements.

Ruthenium alloyed with platinum, palladium, titanium, and molybdenum have many applications. It is an effective hardening element for platinum and palladium. Within the tetramers, each Ru adopts octahedral molecular geometry, with two bridging fluoride ligands.