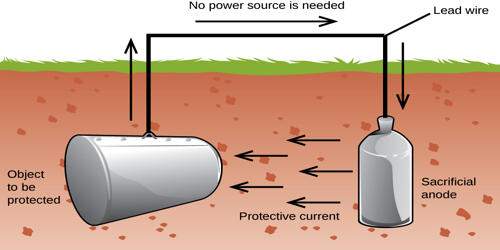 Sacrificial metal is a metal that can be used for a sacrificial anode. A sacrificial metal is a metal used as a sacrificial anode in cathodic protection that corrodes to prevent a primary metal from corrosion, galvanization, or rusting. Sacrificial protection is a corrosion protection method in which a more electrochemically active metal is electrically attached to a less active metal. When metal surfaces come into contact with electrolytes, they undergo an electrochemical reaction known as corrosion. Corrosion is the process of returning a metal to its natural state as ore and in this process, causing the metal to disintegrate and its structure to grow weak.

These metal surfaces are used all around us, from pipelines to buildings to ships. It is important to ensure that these metals last as long as they can and thus necessitates what is known as cathode protection. The sacrificial process occurs when the more reactive metal, which may be attached using copper wires, donates its electrons to the iron and replaces those lost when the iron has oxidized, thereby reverting the iron back to its original state.

When two metals touch each other and water is present, electrolysis occurs. One well-known example is the reaction between zinc (Zn) and iron (Fe). Zn atoms ionize as it is more electronegative and is oxidized and corrodes. The highly active metal donates electrons to replace those which may have been lost during oxidation of the protected metal.

Most of the steel object is coated with a layer of zinc, which is more electronegative than the iron, preventing it from rusting. Coating things in sacrificial metals, also known as galvanizing, is used in lots of different things. For example, it is used to coat things like nails, or pipes so they do not rust. Similarly, sacrificial bars of a metal such as magnesium can be attached to an oil rig or the hull of a ship to prevent it from rusting and breaking down. Sacrificial protection is used for corrosion protection in: Underground tanks, Water heaters, Above-ground tanks, Hulls of ships, Pipelines, etc.