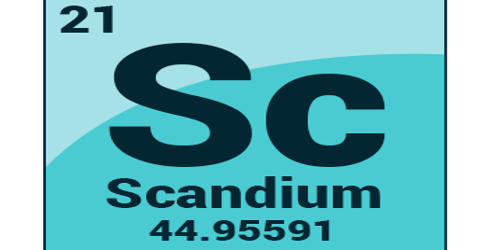 Scandium is a chemical element with the symbol Sc and atomic number 21. It is a rare-earth metal of Group 3 of the periodic table. A silvery-white metallic d-block element, it has historically been classified as a rare-earth element, together with yttrium and the lanthanides. It is fairly stable in air but will slowly change its color from silvery white to a yellowish appearance because of the formation of Sc2O3 oxide on the surface.

It was discovered in 1879 by spectral analysis of the minerals euxenite and gadolinite from Scandinavia. After Russian chemist, Dmitry Ivanovich Mendeleyev in 1871 predicted this element’s existence, tentatively calling it ekaboron, Swedish chemist Lars Fredrik Nilson in 1879 discovered its oxide, scandia, in the rare-earth minerals gadolinite and euxenite, and Swedish chemist Per Teodor Cleve later in 1879 identified scandium as the hypothetical ekaboron.

The properties of scandium compounds are intermediate between those of aluminium and yttrium. A diagonal relationship exists between the behavior of magnesium and scandium, just as there is between beryllium and aluminium. In the chemical compounds of the elements in group 3, the predominant oxidation state is +3. Scandium metal is a silvery-white solid with a slight pink or yellow tint when exposed to air. It has a melting point of 1,538°C (2,800°F) and a boiling point of about 2,700°C (4,900°F). Its density is 2.99 grams per cubic centimeter.

Scandium is present in most of the deposits of rare-earth and uranium compounds, but it is extracted from these ores in only a few mines worldwide. It is separated from the other rare-earth by precipitation of the insoluble potassium scandium sulfate or by extraction of scandium thiocyanate by diethyl ether. Because of the low availability and the difficulties in the preparation of metallic scandium, which was first done in 1937, applications for scandium were not developed until the 1970s, when the positive effects of scandium on aluminium alloys were discovered, and its use in such alloys remains its only major application. The global trade of scandium oxide is 15–20 tonnes per year. The abundance of scandium is thought to be about 5 to 6 parts per million in the Earth’s crust. Interestingly, the element seems to be much more abundant in the sun and some stars than it is on Earth.

Scandium is mainly used for research purposes. It has, however, great potential because it has almost as low a density as aluminium and a much higher melting point. The major uses of scandium are as an alloy additive to aluminum-based alloys for sporting goods and in high-intensity metal halide lamps. Scandium iodide is added to mercury vapor lamps to produce a highly efficient light source resembling sunlight. These lamps help television cameras to reproduce color well when filming indoors or at night-time.