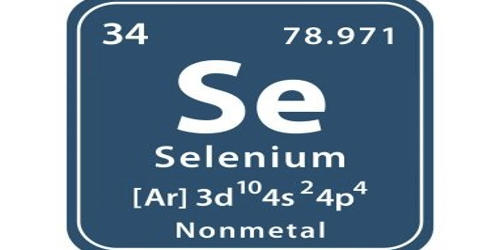 Selenium is a non-metallic chemical element, a member of the group XVI of the periodic table. It is a chemical element with the symbol Se and atomic number 34. It is rare, composing approximately 90 parts per billion of the crust of Earth. It is a nonmetal with properties that are intermediate between the elements above and below in the periodic table, sulfur, and tellurium, and also has similarities to arsenic. It is occasionally found uncombined, accompanying native sulfur, but is more often found in combination with heavy metals in a few minerals. It rarely occurs in its elemental state or as pure ore compounds in the Earth’s crust. Selenium is found in metal sulfide ores, where it partially replaces the sulfur.

Applications in electronics, once important, have been mostly replaced with silicon semiconductor devices. Selenium is still used in a few types of DC power surge protectors and one type of fluorescent quantum dot.

In chemical activity and physical properties, it resembles sulfur and tellurium. It is among the rarer elements on the surface of this planet and is rarer than silver. It is a metalloid. A metalloid is an element that has some characteristics of metal and some of a non-metal. 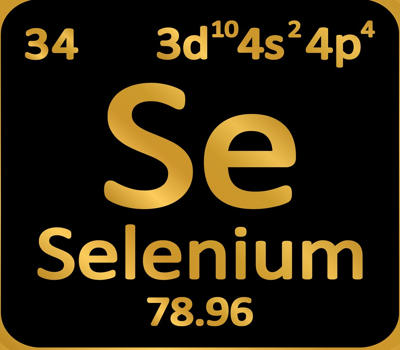 Selenium is a very rare element. Scientists estimate its abundance at about 0.05 to 0.09 parts per million. Native selenium is a rare mineral, which does not usually form good crystals, but, when it does, they are steep rhombohedra or tiny acicular (hair-like) crystals.

Selenium occurs naturally in a number of inorganic forms, including selenide, selenate, and selenite, but these minerals are rare. The common mineral selenite is not a selenium mineral, and contains no selenite ion, but is rather a type of gypsum (calcium sulfate hydrate) named like selenium for the moon well before the discovery of selenium. Selenium is most commonly found as an impurity, replacing a small part of the sulfur in sulfide ores of many metals.

In living systems, selenium is found in the amino acids selenomethionine, selenocysteine, and methyl selenocysteine. In these compounds, selenium plays a role analogous to that of sulfur. The major producers of selenium in the world are Japan, Canada, Belgium, the United States, and Germany.

Commercially, selenium is produced as a byproduct in the refining of these ores, most often during production. It is used to manufacture electronic components and rubber. Minerals that are pure selenide or selenate compounds are known but rare. The chief commercial uses for selenium today are glassmaking and pigments. Selenium is a semiconductor and is used in photocells.