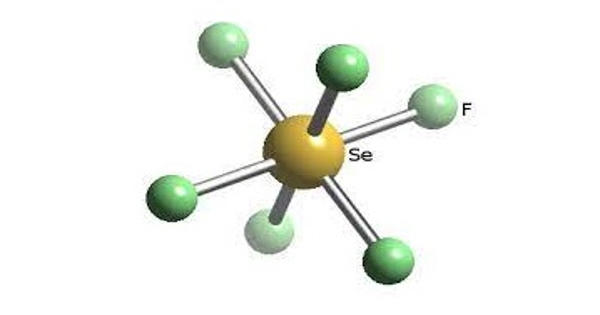 Selenium hexafluoride is a colorless gas used as a electrical insulator. It is the inorganic compound with the formula SeF6. It is very toxic colourless gas described as having a “repulsive” odor. When heated to high temperatures it may decompose to emit toxic fluoride and selenium fumes.  It is not widely encountered and has no commercial applications. It is only slightly soluble in water. It does not occur naturally in the environment.

Selenium hexafluoride is a colorless gas. It is much more reactive and toxic than sulfur hexafluoride. It has a bad odor. It is only slightly soluble in water. It does not occur naturally in the environment.

Selenium hexafluoride is made by heating selenium and fluorine together. Like many compounds of selenium, SeF6 is hypervalent. The compound has octahedral molecular geometry with an Se−F bond length of 168.8 pm. When released to air, selenium hexafluoride will react with moisture, forming other compounds which are removed from the atmosphere by rainfall.

It is slightly soluble in water. It reacts slowly with water to form other compounds. It may also evaporate from water. SeF6 can be prepared from the elements or by the reaction of bromine trifluoride (BrF3) with selenium dioxide. The crude product is purified by sublimation.

The relative reactivity of the hexafluorides of S, Se, and Te follows the order TeF6 > SeF6 > SF6, the latter being completely inert toward hydrolysis until high temperatures. SeF6 also resists hydrolysis. The gas can be passed through 10% NaOH or KOH without change, but reacts with gaseous ammonia at 200°C.

Selenium hexafluoride is used as a gaseous electric insulator. It may be prepared by passing gaseous fluorine over finely divided selenium in a copper vessel. Industrial selenium exposure is common for makers of arc light electrodes, electric rectifiers, and semiconductors. It is not widely encountered and has no commercial applications.