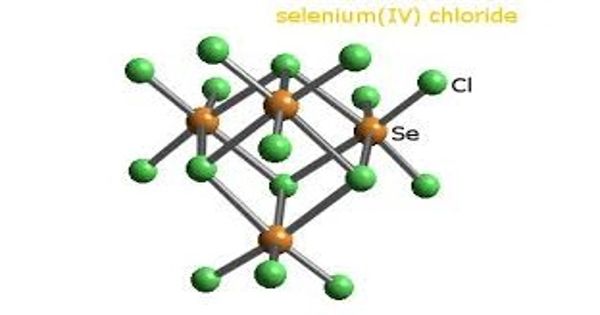 Selenium tetrachloride is a white-yellow deliquescent powder/pieces in appearance with a pungent/ garlic odor. It is the inorganic compound composed of the formula SeCl4. SeCl4 has distorted trigonal pyramid geometry. This compound exists as a yellow to white volatile solid. Here, Se has only one lone pair of electrons and so, it is sp3d hybridized.

Selenium tetrachloride is the inorganic compound composed of the formula SeCl4. It has distorted trigonal pyramid geometry. This compound exists as a yellow to white volatile solid.

It is one of two commonly available selenium chlorides, the other example being selenium monochloride, Se2Cl2. SeCl4 is used in the synthesis of other selenium compounds. It is non-flammable and on exposure to heat undergoes decomposition and emits toxic fumes of selenium and chloride. 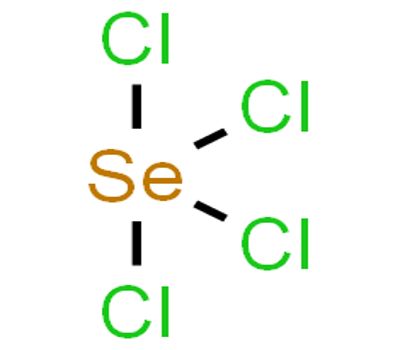 The SeCl4 molecule is polar because the lone pair of nonbonding electrons in the valence shell of the selenium atom interacts with the bonding pairs of electrons, causing a spatial asymmetry of the dipole moments of the polar Se-Cl bonds. The result is a SeCl4 molecule with a net dipole moment. The compound is prepared by treating selenium with chlorine. When the reacting selenium is heated, the product sublimes from the reaction flask. The volatility of selenium tetrachloride can be exploited for the purification of selenium.

Selenium rarely occurs in its elemental state in nature and is usually found in sulfide ores such as pyrite, partially replacing the sulfur in the ore matrix. Solid SeCl4 is actually a tetrameric cubane-type cluster, for which the Se atom of a SeCl6 octahedron sits on four corners of the cube and the bridging Cl atoms sit on the other four corners. The bridging Se-Cl distances are longer than the terminal Se-Cl distances, but all Cl-Se-Cl angles are approximately 90°.

Selenium tetrachloride can be reduced in situ to the dichloride using triphenylstibine:

Selenium tetrachloride reacts with water to give selenous and hydrochloric acids:

Upon treatment with selenium dioxide, it gives selenium oxychloride: