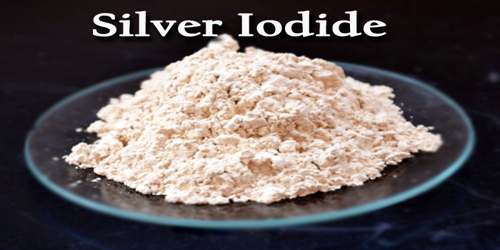 Silver iodide is a pale-yellow, odorless powder that darkens when it is exposed to light. The darkening occurs because silver ions (Ag+; silver atoms with a positive charge) are converted to neutral silver atoms (Ag0) that are dark gray in color. The silver contamination arises because AgI is highly photosensitive. This property is exploited in silver-based photography. It is used in photography, as an antiseptic in medicine, and in cloud seeding. Some concerns have been expressed about the environmental and health effects of using silver iodide for cloud seeding. However, only small amounts of silver iodide are released into the atmosphere. That which does fall to earth does not dissolve in water and so is unlikely to enter a community water supply.

Silver iodide occurs naturally in the mineral odargyrite, which is also known as iodyrite, from which it can be extracted. The compound is extracted by adding concentrated hydriodic acid (HI) to the mineral, which dissolves out the silver iodide. The silver iodide can then be recovered by evaporating the solution and purifying the product. The compound can also be made more easily by reacting silver nitrate (AgNO3) with sodium or potassium iodide (NaI or KI) under a ruby red light. The colored light is used to prevent oxidation of the silver ion to silver metal during the preparation: AgNO3 + NaI → AgI + NaNO3. Below 420 K, the β-phase of AgI, with the wurtzite structure, is most stable. This phase is encountered in nature as the mineral iodargyrite.

Above 420 K, the α-phase becomes more stable. This motif is a body-centered cubic structure which has the silver centers distributed randomly between 6 octahedral, 12 tetrahedral and 24 trigonal sites. At this temperature, Ag+ ions can move rapidly through the solid, allowing fast ion conduction. The transition between the β and α form represents the melting of the silver (cation) sublattice. The entropy of fusion for α-AgI is approximately half that for sodium chloride. Silver iodide is prepared by reaction of an iodide solution (e.g., potassium iodide) with a solution of silver ions (e.g., silver nitrate). A yellowish solid quickly precipitates. The solid is a mixture of the two principal phases. Dissolution of the AgI in hydroiodic acid, followed by dilution with water precipitates β-AgI.

The primary use of silver iodide is in photography. . The compound was first used for this purpose in the early nineteenth century by the French experimenter Louis Jacques Mandé Daguerre (1787–1851). The other major use for silver iodide is in cloud seeding. Cloud seeding is the process by which some foreign material usually silver iodide or dry ice (solid carbon dioxide) is dropped into a rain cloud. The crystalline structure of β-AgI is similar to that of ice, allowing it to induce freezing by the process known as heterogeneous nucleation. Approximately 50,000 kg are used for cloud seeding annually, each seeding experiment consuming 10–50 grams. It is also use as an antiseptic has also been superseded by newer products.