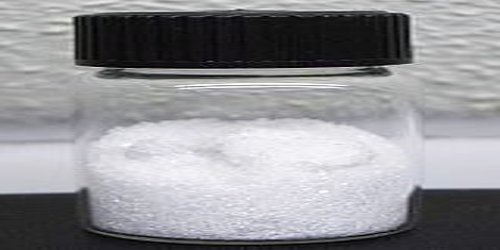 Silver nitrate is a poisonous, clear, crystalline compound that darkens when exposed to light. It is an inorganic compound with chemical formula AgNO3. Albertus Magnus, in the 13th century, documented the ability of the nitric acid to separate gold and silver by dissolving the silver. Magnus noted that the resulting solution of silver nitrate could blacken skin. It is used in photography and silver plating and as an external antiseptic. Silver nitrate is far less sensitive to light than the halides. It was once called lunar caustic because silver was called Luna by the ancient alchemists, who believed that silver was associated with the moon. In solid silver nitrate, the silver ions are three-coordinated in a trigonal planar arrangement.

Applied to the skin and mucous membranes, silver nitrate is used either in stick form as lunar caustic (or caustic pencil) or in solutions of 0.01 percent to 10 percent silver nitrate in water. The stick is used for removing warts and granulation tissue and for cauterizing wounds and ulcerations. Very dilute solutions are astringent and mildly antiseptic. A 1 percent or 2 percent solution is effective against gonococcal bacteria and may be applied to the eyes of newborn infants to ensure against blindness from gonorrhea.

The chemical formula of silver nitrate is AgNO3, and its molar mass is 169.87 g/mol. It is a salt, and its chemical structure consists of the silver cation (Ag+) and the nitrate ion (NO3–), in which the central nitrogen atom is covalently bonded to three oxygen atoms with a net charge of -1.

Silver nitrate is made in large quantities by dissolving silver in nitric acid. It crystallizes in transparent plates that melt at 212 °C (414 °F). The solubility at 20 °C (68 °F) is 222 grams per 100 grams of water. It is moderately soluble in methyl and ethyl alcohols and to a lesser extent in various other organic solvents. When heated to about 320° C (608° F), silver nitrate loses oxygen and forms silver nitrite. At a red heat, silver is formed. Silver nitrate is water soluble and non-hygroscopic. Unlike many other silver salts, it is not sensitive to light. It is an oxidizing agent and is quite reactive as the nitrate ion can be easily replaced by other groups. Thus, it is a useful starting material for making many different silver compounds including silver halides, silver oxide, etc., as well as different metal nitrates such as copper nitrate. Silver nitrate is found as a white odorless solid with a density of 4.35 g/mL, melting point of 210 °C and the boiling point of 440 °C.

Pure silver nitrate is an intermediate in the preparation of other silver salts, including the colloidal silver compounds used in medicine and the silver halides incorporated into photographic emulsions. It is used for treating some infections, warts, and ulcers and is also used as a cauterizing agent and a disinfectant. It is used for silver staining, for demonstrating reticular fibers, proteins, and nucleic acids. For this reason, it is also used to demonstrate proteins in PAGE gels. It can be used as a stain in scanning electron microscopy. Ingestion of silver nitrate causes violent abdominal pains, vomiting, and diarrhea, with the development of gastroenteritis. Treatment includes oral administration of common salt solutions, milk (or white of egg and water), and soap in water to protect the mucous membranes of the esophagus and stomach and precipitate the poisonous free silver ions as silver chloride.

Silver nitrate is toxic and corrosive and must be handled with care. It is used in very dilute solutions for medical applications. Skin or eye contact to small amounts of silver nitrate or its dilute solutions will cause greyish-black staining of the tissues (called argyria), while exposure to higher concentrations can cause burns.