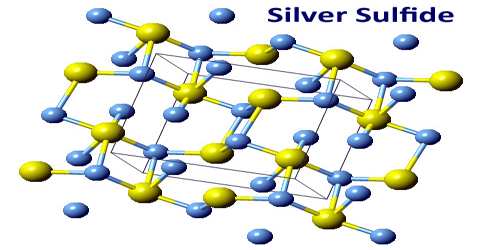 Silver sulfide (Ag2S) is a dense black solid that is insoluble in all solvents, but is degraded by strong acids. It is the sulfide of silver. When silver sulfide is formed on electrical contacts operating at atmosphere rich in hydrogen sulfide, it results to the formation of long filaments known as silver whiskers. It is found in nature as relatively low temperature mineral acanthite. It is useful as a photosensitizer in photography. Structure and Properties of Silver Sulfide

Chemical deposition from aqueous solutions of silver nitrate and sodium sulfide was used for synthesis of coarse-crystalline and nanocrystalline silver sulfide Ag2S powders. There are three froms of structures, they are known: monoclinic acanthite (β-form), stable below 179 °C, body centered cubic so-called argentite (α-form), stable above 180 °C, and a high temperature face-centred cubic (γ-form) stable above 586 °C. The higher temperature forms are electrical conductors. It is found in nature as relatively low temperature mineral acanthite. Acanthite is an important ore of silver. In the acanthite, monoclinic, form there are two crystallographically distinct silver atoms with two and three near neighbour sulfur atoms respectively. The name argentite refers to a cubic form, which, due to instability in “normal” temperatures, is found in form of the pseudomorphosis of acanthite after argentite. Silver sulfide is insoluble in all solvents, but is degraded by strong acids. Silver sulfide is a network solid made up of silver (electronegativity of 1.98) and sulfur (electronegativity of 2.58) where the bonds have low ionic character (approximately 10%). It is a component of classical qualitative inorganic analysis. When formed on electrical contacts operating in an atmosphere rich in hydrogen sulfide, long filaments known as silver whiskers can form. When combined with silver the hydrogen sulfide gas creates a layer of black silver sulfide patina on the silver, protecting the inner silver from further conversion to silver sulfide.